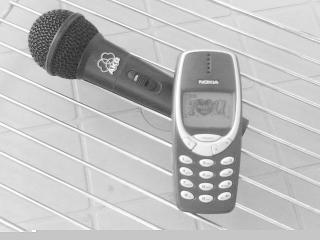 To have an active social life is to have a cell phone and a bit of knowledge about microphone technique. You see, in Metro Manila, life often revolves around these two gadgets. Friends usually hook up or plan on partying by way of exchanging text messages. And in any festive gathering at any public arena, a karaoke machine is almost always available.

Never mind that you’re tone deaf; the songs you want to sing are never on your key signature; or the sound of nails scratching against a blackboard sounds more appealing than your voice. What’s important is that you have the audacity to grab the microphone and belt out a tune in front of a boisterously drunken and unpredictable crowd.

A word of caution: never sing Frank Sinatra’s My Way in any public venue; do so only in the safety of your own home. It has been widely reported that crooners who publicly displayed fondness for this song often got shot; either someone did a horrific rendition of it, and for disrespecting The Chairman got punished; or some guy sang it magnificently well that his performance triggered a bullet into his heart from some bitterly jealous thug in the audience.

Either way, just the same, better pick out tunes from The Beatles’ or Bee Gees’ catalogues which are usually safer songs to sing.

As for the cell phone, amongst the locals, ownership often conveys one’s social status; the newer the model, the higher the strata one is perceived to belong to.

Who's to say then that the fish ball vendor in Divisoria also selling Smart E-load with her Nokia 6680, Aling Choleng, is indeed some grand dame with nothing else better to do with her time? Nevertheless, some models available here offer wondrous features that far surpass those used by gadget-conscious New Yorkers. I wouldn’t be surprised if new models for this upcoming holiday season include built-in iPod Nanos.

posted by Señor Enrique at 9:52 AM