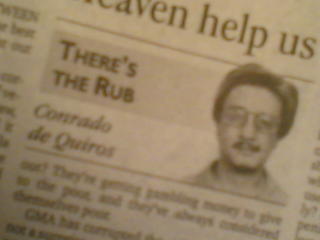 Although offering an almost infinite number of things to do and see, New York, the veritable city that never sleeps, also breeds a certain loneliness felt most during its bleak bitter winters.

With a mug of hot chocolate, a book often provided solace for me during those times. From the controversial Jerzy Kozinski’s psychological novels to Carl Jung’s mystical theories, I’ve become an ardent fan of an eclectic bunch of thinkers and their published writings.

And so when I relocated to Metro Manila, I once again resorted to books as an introduction to the city's pervading culture. Browsing at a local bookstore, I was thrilled to have discovered Jose Rizal’s seminal works, Noli Me Tangere and El Filibusterismo as translated in English by Ma. Soledad Lacson-Locsin. I read them in earnest. There were other books by contemporary Filipino writers that I delved into. My favorite is Swatting The Spanish Flies by Margarita Ventenilla Hamada, a well-crafted scathing commentary on the Filipino zeitgeist. I even bought several copies of which to send as gifts to my New York bibliophile friends.

After gaining somewhat of a fairly good insight about the local terrain, so to speak, I began to take more notice of this brilliant writer whose column appears in the editorial section of The Philippine Daily Inquirer. His name is Conrado de Quintos. He usually writes about the political affairs of the state. However, the issues and personalities he featured were mostly unknown to me then so, I would involuntarily Zen-out, by the third or fourth paragraph.

Surprisingly, there was a couple of occasions in which he wrote about music. I was impressed by his deep insight and ethereal sensitivity to music in general, and to the featured artists in particular.

Eventually, as I became more cognizant of the nuances of our political arena, as well as the roles of its major players, I came to fully appreciate Mr. de Quintos. Indeed, I am humbled by his literary style, including his courage to confront certain powers that be. I often wonder though if his voice ever went unheeded by most regular folks -- the masses -- for he writes so eloquently in English.

Be that as it may, I oftentimes pray that we as a nation succeed in eradicating aberrations from our local politics and corruptions by our civil servants. This way, Mr. de Quintos, will write more about music.


To check out a sampling of Mr. de Quintos’ column, click on any of the following links:

“You say you're "tired of chasing the bully around the schoolyard."
I say you are just as confused about your metaphors as you are
about your mandate. The normal course is for the bully to chase the
smaller kids around the yard, not for the smaller kids bully around
the yard. The normal course, too, is for the other kids to want to stop
being bullied and fight back. Guess who's who in this equation.”