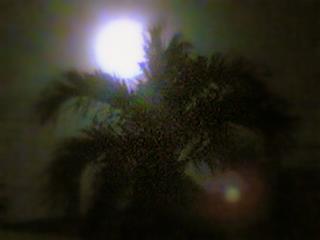 It has been a daily ritual inside the family compound in Sampaloc -- Conchita asking the rambunctious children to stop playing out in the yard, and for the household help to refrain from any more sweeping of it until the next morning. This would be followed by a reminder for everyone to restrict all other activities inside the house.

It was once again twilight time -- the period when the "other friends," as Conchita fondly referred to them, would claim the ground for their own use and enjoyment.

The help, as usual, would reticently comply with her wishes, while the young kids would ignore her and continue their play until berated for it. The male adults, if they were around, would remain comfortably slouched on the plastic lounge chairs as if stricken with temporary deafness.

And so it went within the family compound until one time, during the wee hours of the morning, when the entire household was aroused from sleep by Sebastian’s horrific screaming.

Startled and drowsy from having been rudely awakened, Ignacio, stumbled out of his bedroom, trying to figure out exactly where it came from. His wife Conchita trailed right behind him. Out in the hallway, they noticed a light coming from the bathroom through its slightly opened door. They hesitantly walked towards it, and once near the door, Ignacio lightly pushed it wide open.

He scratched his head upon seeing Sebastian, his balikbayan nephew from Toronto, sprawled on his back on the bathroom floor uncontrollably sobbing like a child. His denim shorts and underwear were pulled down to his ankles.

Ignacio was suddenly paralyzed with fear upon noticing that his nephew’s exposed testicles were swollen beyond humanly-possible proportions. They were humongous! They were larger than the giant watermelon that won the top prize at last summer’s harvest festival in his hometown in Bicol.

Conchita had to slap him hard on the back of his head to revive him out of his freaked-out state. It was a sure-fire hit worthy of a home run had she been a major league batter. Ignacio fell over forward on top of the young man; his nose landed directly right on the young man’s gaped mouth, while his right knee accidentally shoved into Sebastian’s swollen appendage. The young man let out a cry of sheer torment.

Ignacio groggily recovered his senses, but was severely distressed by Sebastian’s skanky foul breath. He signaled a peace sign to his wife to indicate a follow-up slap would be unnecessary. Adversities seem to reveal this woman’s manly strength, he thought.

Both husband and wife soon became aware of the utterly revolting putrid odor engulfing the bathroom. Conchita regurgitated as if about to throw up, but immediately regained her composure; remaining focused on the task at hand.

When Ignacio knelt down beside his nephew to figure out how he could lift and take him back to his bedroom, it dawned on him that the putrid smell, evocative of an open grave, was actually emanating from the young man’s mouth!

The stench soon permeated the hallway. Inday, unable to control herself, started vomiting violently. The kids, who were also awakened by Sebastian's screaming, ran back to their respective room, disgusted by the odor and the sight of vomit. The remaining unfazed adults chose to stand by the door -- intent on knowing what the commotion inside the bathroom was all about. They were in for a shock when they finally saw Sebastian’s monstrous transformation.

Moving Sebastian from the bathroom back into his bedroom became an engineering feat requiring finely choreographed complex maneuvers; any abrupt movement would induce excruciating pricking pains in the young man's voluminous testicles. All the men in the household pitched in and approached their respective task with supreme diligence. It took a good hour to accomplish the job. At the end, Sebastian lay torpid on his bed while sweating profusely.

Literally crippled by the torturous pains inside his monstrosity and continually induced into a semi-comatose state by his own putrid breath, Sebastian would remain in bed for the next four weeks. Ignacio and Conchita, immediately sensed that his supernatural illness was beyond the scope and skills of an ordinary physician. They decided instead to summon the help of a local medicine man, Ka Entong, from Conchita’s province of Ilocos Sur.

Upon his arrival, the medicine man hastily set off to perform a cleansing ceremony inside Sebastian’s bedroom. Brandishing burning incense and shaking a rattle of what appeared to be made of bamboo with beads inside, he began chanting and prancing about like a madman; sporadically spitting chewed tobacco on Sebastian who could only growl his protest. Ignacio, disturbed by all that spitting, decided against intervening. Conchita, on the other hand, was visibly upset by the litter created by the ashes of the burning incense.

Ka Entong finally collapsed on the floor. Everyone stared at him transfixed. No one dared touch him as he struggled to get up. Ka Entong silently admitted getting too old for this line of work; even entertaining thoughts of early retirement. When he finally managed to get up, he begged Ignacio for a glass of water and invited everyone to join him in the living room.

After quenching his thirst, the medicine man claimed Sebastian’s illness was attributed to the young man’s disrespect for a sort of sacred piece of ground in which Sebastian once spat and urinated on. It was the mango tree out in the yard. Everyone was dumbfounded. Ka Entong looked at Ignacio and Conchita, and then recited an overview of treatments he deemed appropriate to combat Sebastian’s unearthly illness.

Daily rituals of bizarre incantations, as well as heroic doses of obscure cocktails of indigenous herbs, barks and leaves ensued. In addition, there were daily offerings of fruits, native delicacies and colorful candies under the mango tree. It took almost a month before Sebastian fully recovered from the crippling spell. He soon confirmed the medicine man’s findings by admitting that he had, in fact, spat and urinated on the mango tree around twilight time; nine hours later, he manifested the ill effects of the illness. That was when he was found in the bathroom by his uncle and aunt.

Word went around the entire neighborhood about Sebastian’s brush with the other friends. Cruel jokes were spawned during the many drinking sessions among the locals; some glorified while others vilified his ghastly transformation.

Sebastian flew back to Toronto; vowing never to return. Currently married with two kids, he submitted his dissertation on Shamanism last spring. However, he ended up breaking his vow. Last month, he mailed in his application for a teaching post at one of the Philippines’ prestigious universities.