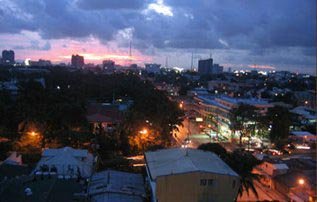 The house where I live is surrounded by a few tall buildings, and I don’t get much of a chance to witness beautiful sunsets. That’s why I get excited whenever I come across photographs like this one.

Discovered it while I was digging into Michael Josh’s iBlog photo archives. I was disappointed he didn’t have much of a photo collection but what I found out about this young man was uniquely fascinating.

First of all, he is the first Filipino to podcast. Along with friends, they share their insights on technology, sports, music, food, love and life through The Michael Josh Show.

There are supposedly only 13 Filipino podcasters currently in existence; most of which are produced abroad with only a handful produced locally. I suggest for those of you who aspire to produce your own podcast to check out his blogsite, introduce yourselves and pick his brain, so to speak.

Aside from his keen interest in many Apple products, various other technology gadgets, blogging and podcasting, Michael Josh works as a Senior Operations Administrator at GMA7 news operations.

Based on their excellent work and for their potential to contribute to the practice of good journalism in their communities, Michael Josh was among the three Filipino journalists selected as graduate fellows by the Konrad Adenauer Center for Journalism at the Ateneo de Manila University (CFJ). The fellowship supports the studies of the grantees for the Master of Arts in Journalism.

As if that’s not enough, he's also a music artist. He has his own album, Peace in the Midst of the Storm, from Musicworx Ministries, a non-profit organization into missionary music.

This young man’s enthusiasm to share his interests and knowledge is conveyed by his well-written, easily understood blog posts and by the ease of navigating around his site, which reveal his proficiency in graphic and Web design as well.

Now, go and check out his site!

posted by Señor Enrique at 5:26 AM