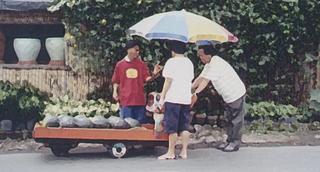 Divisoria, at 3 o’clock in the morning, would be abuzz with its usual hustle and bustle; wholesale dealers negotiating the day’s selling prices with regular customers, some of whom are public market stall merchants and pushcart vendors.

There would be loads of fresh vegetables and fruits off the trucks from Batangas and Tagaytay farms, as well as produce from the merchant ships docked at the nearby piers, which sailed from China, Taiwan and other Philippine islands.

Mang Domeng, by 5 o’clock, would have already picked out and paid for a stock of fine seedless red watermelons (or whatever fruit would be in season at that time) that he would peddle on his pushcart. His regular customers live in the high-fenced mansions of the affluent New Manila, in Quezon City. After making his usual rounds, he would settle under the shade of an acacia tree along Gilmore Avenue where motorists would stop and buy the rest. By two o’clock in the afternoon everything should have been sold. He would then head on home.

He lived in one of the squatter shacks along the railroad near the Blumentritt Station. He was quite popular among the residents of this area; sought after for his insight and unbiased advice by both the young and old. Although asked by many to run as their Barangay chairman, Mang Domeng would much prefer a headache-free life as a pushcart vendor.

Not much was known about his past. Neighbors only heard bits and pieces about his wife and two kids having perished in a fire while Mang Domeng worked in California as a migrant farm worker. He would be evasive but the sadness revealed by his eyes would discourage anyone from further probing into his private life. Eventually, Mang Domeng’s affable demeanor and down-to-earth wisdom won over the entire squatter neighborhood; it was soon considered disrespectful to badger him with personal questions.

Mang Domeng loves the fruit business; enjoys peddling them and meeting people from various walks of life. Most of those he had befriended would miss him during the wet season when the punishing rains would prevent Mang Domeng from making his daily rounds. Money becomes even scarcer during this time of the year, especially in his impoverished neighborhood. Mang Domeng, generous to a fault, would cook a pot full of lugaw or macaroni soup to share with the neighbors. A gift of some cash would be given to friends with toddlers to buy their baby formula.

Most folks were amused to notice that although Mang Domeng would be broke every now and then like most of them, he never seemed poor at all. He always managed to lead a decent life with respectable though humble means of income. Somehow Mang Domeng was able to generate an income from other efforts during the rainy season.

One beautiful day of May, there was a small crowd gathering around his pushcart; excited over the yellow and green mangoes that filled his cart. Afraid that his entire stock would be sold out before Mang Domeng gets to their streets, some of his regular customers, would get in their cars and meet Mang Domeng at Balete Drive right off E. Rodriguez Avenue where he would usually start each morning.

So on this morning with his pushcart full of the season’s first harvest of Zambales mangoes, Mang Domeng was busily bagging a purchase when someone suddenly called out his name – his full name, Domingo, not Mang Domeng. He was starlled.

He looked up and saw this nicely dressed portly woman about his age. It took him a couple of more seconds before he recognized Celing, his wife’s best friend who had married an American and moved to New York’s Long Island. He hasn’t seen her since they saw her off at Manila International Airport more than thirty years or so ago.

Over coffee that following Sunday at Starbucks in Roxas Boulevard in front of the U.S. Embassy, Celing shed tears after hearing about the details of her best friend’s tragic death along with her two children. Mang Domeng confessed that his inability to cope with that devastating loss led him to alcoholism and ultimately, a derelict life. And it was the patience of their mutual friend, Carding, a priest, who tirelessly watched over him until he regained a grip on his life. It took almost ten years, but he did it.

As if apologetically, he admitted to Celing that he wasn’t the perfect husband as perceived by many. Sure he was working as a migrant farmer in California to provide a better life for his family, but the truth was, he went abroad to somehow recapture his once single life. And whatever money he sent home, it was a mere fraction of what he spent on almost nightly drinking and carousing.

It took the death of his family and losing everything he had to make him admit what a selfish clod he truly was; always out for himself. Ever since pulling himself out of his destitute predicament, he has learned to give; whether being of service to others or sharing what little he has with those with none. He told Celing that giving not only help others, it creates more for the person doing the giving. What he got most out of it was self-forgiveness and subsequently, inner peace.

Celing appreciated Mang Domeng’s candor. She also admired his having gone through and survived a challenging ordeal. She remembered what her mother used to tell her: With adversity comes astonishing insight.

Celing then told him that her American husband, a successful real estate developer, died of a heart attack seven years ago; they were childless. Her husband, during the Vietnam conflict, was exposed to certain chemicals or gas which caused him to become sterile. And although her husband left her with a lot of money, including sizeable real estate holdings, the loneliness after his death has become progressively unbearable. Celing recently went back to Manila with the hope of meeting someone she could spend the rest of her life with.

A year after that auspicious day in May, Mang Domeng and Celing were married at Mt. Carmel Church in New Manila. The wedding rite was conducted by their childhood friend, Father Alonzo, known as Carding to them. The reception was held at a rented mansion in Quezon City which was beautifully decorated for the occasion. Mang Domeng invited many of his friends from the old squatter neighborhood, as well as friends from Divisoria; whereas, Celing invited her ritzy friends from New York and New Manila.

That night, there was no economic divide between the guests; the love that permeated the festivities wrapped them all as one. The abundance of delectable food and great dance music spurred on the celebration until the wee hours of the morning. A great time was had by all.

The couple opened a wholesale fruit business in Divisoria. They also have a fleet of pushcarts that Mang Domeng had assigned to old friends from his old neighborhood. On weekends, they’re usually found in their fruit farm in Batangas. They also spend two months every year in Celing’s sprawling mansion along New York’s Long Island Sound.

posted by Señor Enrique at 6:20 AM

is this a true story?

It's fiction, Jasdupre, but partly based from a true story.