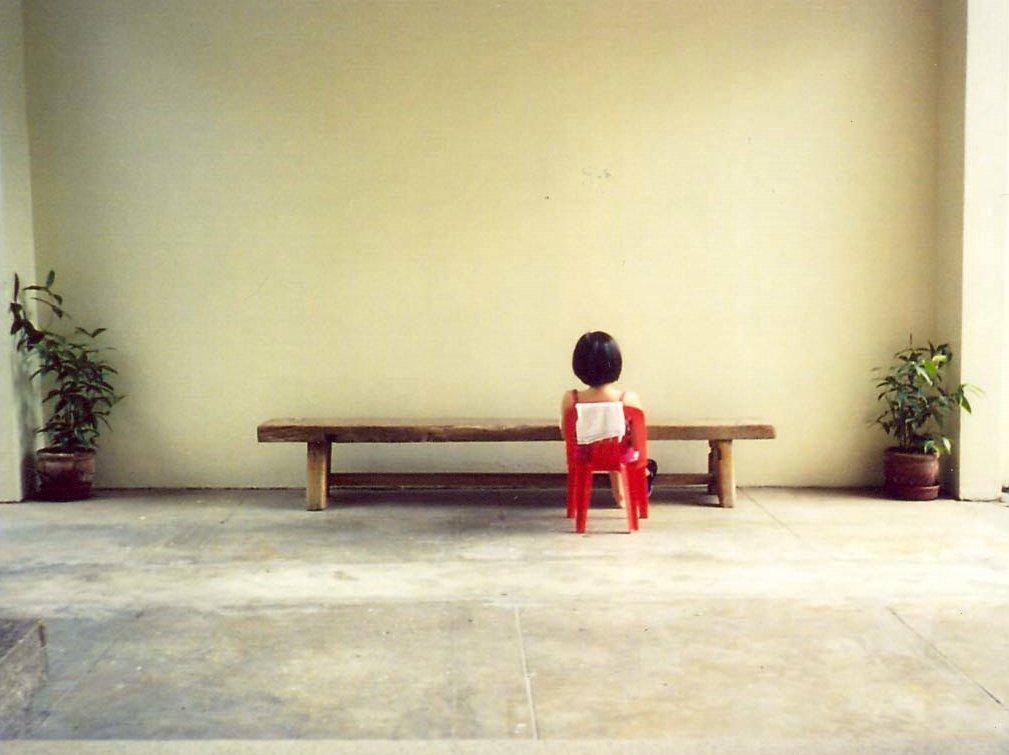 THE IDEA WAS NOT TO TELL A SINGLE SOUL. Neither Papa nor Mama should ever suspect that something was terribly wrong. They were both thousands of miles away from home, living in a foreign country; working hard to provide a comfortable life and a brighter future for everyone. And so as not to upset them, everyone at home must pretend everything was all right as always in Manila.

Right after promising she wouldn’t tell anyone, little Bechay decided to take a nap to sleep off her headache.

ONE MORNING, AS LOLA ARSING WATCHED little Bechay got on the tricycle that would take her to school, she started feeling a horrible sense of guilt. It wasn’t right, she told herself, to involve her granddaughter into this brewing dilemma. Little Bechay was much too young to participate in the adult world of pretense and deceit. But the burdened grandmother was left without any other choice.

She also noticed that Little Bechay has been spending more time alone lately; obsessively brushing her doll’s hair. She seemed lost in some world of her own.

The other day, she once again had to dip into the family savings entrusted to her by her daughter. What she had withdrawn so far indicated a significant amount. She was certain it would warrant her daughter’s suspicion once discovered. Lola Arsing hated the daunting task of having to explain everything to her daughter and son-in-law when they come home for vacation in a couple of months -- in time for the summer fiesta.

Lola Arsing wrapped the rolled up bundle of cash with her linen handkerchief and pinned it inside her blouse. She grabbed her pocketbook and folding fan and then swiftly headed out the door. The waiting driver of the tricycle knew exactly where to take her.

She arrived at the hospital just as Carmen finished a sponge bath assisted by her mother. Carmen’s bruises and lumps were healing just fine, but her doleful eyes still reflected the deep sadness of losing her baby. Seeing Carmen made it difficult for Lola Arsing to find a good enough reason to forgive Manuelito for having brought on such tragedy into these people’s lives. She uttered apologies as she handed over the money to Carmen that would pay the remaining balance of her hospitalization and medical expenses.

LATER THAT EVENING, LITTLE BECHAY was on the phone speaking with her father. Papa’s voice was as exuberant as ever. He was asking how his little princess was doing in school. Little Bechay did her best to put on a happy front; impressing even Lola Arsing with her pretentious chatter. However, just as the last few times Papa called, his voice lost its gleeful timbre once told Manuelito was not around to talk to him. Lola Arsing told him that his 15-year old athlete was still in school for basketball practice. "Don't worry, Manuelito is fine,"she assured him.

Actually, Manuelito had gone into hiding somewhere in the lush mountains of Quezon -- far from the vengeful hands of Carmen’s aggrieved husband. Crossing the street one Saturday evening, the couple froze in fright when the motorcycle driven by the intoxicated Manuelito came careening from the corner -- racing uncontrollably towards them. The impact sent Carmen flying off and landing on the sidewalk across the street. It caused her a miscarriage. It was the young couple’s much anticipated first child.

That tragic senseless accident happened three weeks ago on Manuelito’s 15th birthday. The young couple, with the urging of the barangay captain, agreed not to file any criminal charges against Manuelito if his family assumed all medical costs.

LITTLE BECHAY WAS RATTLED FROM HER REVERIE by the ringing telephone. She hesitantly answered it. Just as she feared, it was her mother on the line. She wanted to know if her precious little girl was able to keep a secret. If she were capable of such, Mama would buy her the bicycle she had been asking for.

Little Bechay asked in return if it were going to be for Christmas. Mama excitedly said sooner. But she must first know if Little Bechay could keep a secret. Apprehensively, she answered yes. Mama then told her that she and Papa will be arriving this coming weekend for a month’s vacation; two weeks sooner than expected. No one else knew about it, except Mama’s precious little girl. They wanted to surprise everybody.

Immediately after hanging up the phone, Little Bechay decided to take a nap to sleep off her headache.

Flickr led me to this post. I felt moved. Now the picture meant more than how i see it before landing on your blog. Galeng.