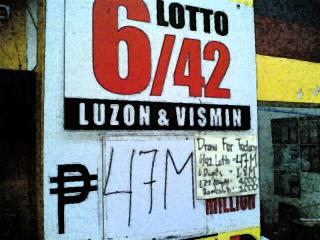 An old proverb claims poverty is a mental disease; a state of mind. And that a man must first experience prosperity in his consciousness before it can manifest into his world. If correct, then Isabel of Pasay City would be the ideal walking testament to this truth.

Shunned by neighbors for being enthralled by other people’s good fortune, Isabel would incessantly talk about this or that who suddenly got these and those; people who experience good fortune unexpectedly.

She would repeatedly exalt the universe for its infinite riches used to bless ordinary people with. However, almost always, neighbors fail to feel the excitement.

Last week, Aleng Mameng who lives down the block had a windfall. Her numbers came up at a jueteng drawing in which she won almost one hundred thousand pesos; finally assuring her daughter’s nursing education. Isabel’s animated ranting about Aleng Mameng’s good luck only further incensed the neighbors already seething with envy.

In another incident, Isabel was jubilant when Elena’s husband was finally able to afford a used car for their growing family. It was from his company’s fleet of service cars being replaced with brand new ones. The payroll department approved its purchase on installment basis. But what thrills Isabel the most was the convenience the car would provide, especially when they had to take the newly-born twins for their pediatrician appointments. However, some neighbors reacted with their usual apathy; others went so far as to focus on the car’s minor scratches and dents.

When Mang Berting inherited a 5-hectar farm in Bulacan, his wife Aleng Nena, immediately rushed over to Isabel’s house to break the news to her. Isabel’s scream of joy was so loud her husband thought it was her who inherited the property, not Aleng Nena.

People in the neighborhood blessed with good fortune or had successfully attained their respective goal in life most often seek out Isabel first to share their euphoric feelings with. They could sense her true happiness for them; unlike the others who would only shrug their shoulders or downplay the merits of another’s good fortune.

Over dinner one night, Lolo Inciong advised Isabel to be more selective whom she talks to about good tidings even though not hers. He warned that she might only be underscoring their resentments for feeling unlucky or having been overlooked by the universe whenever it showers the world with good fortune.

Lack often brings out the worst in people, he would remind her. But Lolo Inciong would always praise Isabel for her admirable and rare quality.

One morning, on her way to the market with her son, little Benny, they ran into Cousin Luis, who immediately tried to hand Isabel a hundred peso bill as balato (a token share from someone’s winnings). He had a lucky streak at the races yesterday. Isabel, as always, refused to accept such things. She would pray for others’ good fortune or be happy about peoples’ windfall, but she would never expect anything from them.

That night after dinner, Benny walked up to his mother who was on the phone with her friend, Sandra. The little boy tried handing her a Lotto ticket that Cousin Luis had dropped off, but she was too engrossed in discussing about a security guard who won more than 70 million pesos from a Lotto drawing. Little Benny was too sleepy to wait for his mother to finish; he went over the altar to place the Lotto ticket under the figure of Sto. Nino and then went to bed.

The following Sunday morning, Cousin Luis, startled everyone in the house with his loud knocking. He was looking for Isabel. After taking a couple of gulps from the glass of water he got from the kitchen, he announced that the Lotto ticket he bought for Isabel as a gift just won her 20 million pesos. Isabel fainted.

posted by Señor Enrique at 7:38 AM

how i wish everybody will be like Isabel. a very rare quality indeed that only a few have.

Lol. Is this s true story?