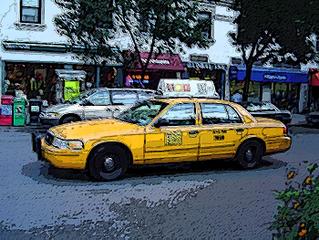 One I came across was an Israeli who, as a teenager in Tel Aviv, spired to join the Mossad. With military service a prime requirement for applicants, he prepared for it by signing up for a stint with the Israeli Air Force’s pilot training program. It was so intensely gruelling -- both intellectually and psychologically -- that afterwards, his frailed nerves suggested a career in kibbutz management might be a more suitable choice after his discharge.

At one solo flight exercise, he was to fly sideways underneath a bridge; its clearance allowed just enough space for the aircraft to go through without clipping a wing.

I could only imagine that four years of excessive adrenaline rush from his training turned him into a reluctant addict that upon immigrating to New York, he was immediately drawn into the perilous excitement that New York cab driving offers – dodging holdups, theft of service scams and incorrigible New York pedestrians and passengers; all that while negotiating hair-raising overtakes and evading the unmerciful men in blue.

The other memorable cab driver I chanced upon was a struggling artist from Madison, Wisconsin. He was so new in the city that I had to navigate our entire journey from midtown Manhattan to Brooklyn’s Williamsburgh section. He was so dazed and confused – not with the city streets but in his entire demeanor – I figured he was either an innately brilliant artist or just took fine arts because he didn’t like math. A couple of months later, a friend dragged me to a gallery exhibit opening at the Lower East Side. While working the room, so to speak, I was surprised to run into this artist/cab driver. He didn’t quite remember me but told me anyway that he had just started working for Mark Kostabi. I didn’t know whether to be happy for him or not.