WHAT'S IN THE NAME? 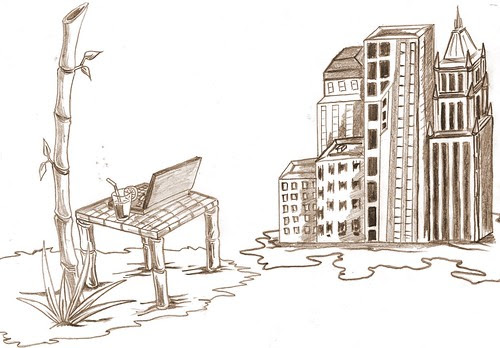 I was born in the year of the dragon in Santa Cruz, Manila, and given the name Enrique after the father of a famous Filipino actor Pancho Magalona. I liked it; not too many kids have that same name at that time.

However, I became to detest it while growing up. Although nicknamed Ric, I would be called Enrique—and rather sternly at that—whenever suspected of some mischief or worse, I had to run another errand, which none of my older brothers were willing to do.

Consequently, hearing it called out by my mother, eldest sister, or by any of the five older brothers on the totem pole made me associate Enrique with agony and/or resentment.

I began to avoid using that name unless required as in school documents or passport application. In school I was referred to by my last name. The only other place I was called Enrique was at the Jai-Alai fronton when I became an amateur at the age of fifteen. The man who managed the amateur club at that time delighted in calling me Enrique. I knew better than to correct him lest I wanted to be paired against a senior player whose sole aim was to bash in a novice’s front teeth with his menacing carambola. No protection of any kind was worn at that time.

After high school was New York. At that time, Julio’s son with a Filipina socialite was not yet around; thus, New Yorkers would often mispronounce my name as Ahn-ri-quah or Ahn-rick. Soon, I was nicknamed Eric to make life simpler for everyone.

When I lost my green card, I was informed by the immigration officials that applying for American citizenship would be a lot easier than to go through the legal process of having it replaced. When I opted for the citizenship I dropped Enrique altogether for Eric. It was a decision I came to later regret.

Since coming back to Manila, I was haunted by my old name; hence I started using it as a pen name, but added senor as prefix to denote a much older (and hopefully, wiser) Enrique. However, with our society being more attuned to English names nowadays, to some, Senor Enrique conveys an old world distinguished persona or someone well-versed in Spanish language and history -- an ilustrado.

The fact is, although I had Spanish in high school, I was more fluent in Spanglish, which I would use in San Juan, Puerto Rico or amongst Hispanic friends in New York. That was the extent of my experience with the Spanish language.

But then again, the Spanish spoken in Puerto Rico is debased Castilian. So, when Rizalist had asked for my definition of a bodeguero as applied in late 19th century Manila, I would have instinctively depicted a brawny peon hauling stuff in a bodega, but would have been proven wrong anyway. A bodeguero, as Rizalist himself had pointed out, was a member of the bourgeoisie or better yet an illustrado; therefore, more of a manager in those days. Actually, I tend to believe his having asked for my thoughts on such linguistic matter was his gentlemanly way of inviting me to join in their blog exchanges. Unfortunately, I never made it back to Marvin’ site after having expressed my gratitude for his efforts.

As for history, I often resort to knowledgeable friends, books, and more recently the Web and blog sites such as La Vida Lawyer’s series on Bonifacio’s trial. Daunted by the fact that history is written by the winners, as Marvin Aceron and Carlos Celdran had said, I’ve shied away from engaging in its discourse. Had I the photographic mind of Fidel Castro, who could quote verbatim immense passages, including their provenance with uncanny precision, I’d gladly do so. That is because if unsuccessful with my arguments, I could at least dazzle the other side with startling quotations.

I therefore apologize, especially to Rizalist if my nom de plum tips off a wrong clue. I’m merely reclaiming a part of myself—a name I now treasure as I get older, but used to loathe when younger, because of the never-ending errands (and on rare occasions, mischief) attached to it.

Ah, the pains of being the youngest in a big family.

posted by Señor Enrique at 6:36 AM

I was born on Christmas so, I was named Noel. I am not sure if the x-mas carol, Noel, inspired my mother to give me that name. Here's another thing: my birthday present is my x-mas present.:)

Sidney, check out my post, last goodbyes. You may find it an interesting topic to blog: our extravagant customs.

My mother named me after the hospital where I was born. She didn't like the name my lola suggested, isunod daw sa kalendaryo. So my mother told lola that she was naming me Catherine, after St. Catherine's Hospital.

my name sounds so antique, not so common, very far from my nickname which is a lot shorter. like you, i don't like my name when i was younger because i envy the beautiful names of my classmates. but what is in a name? as i grow old, i came to realize, it is yours alone, and you feel proud you have a name, better than be named a dozen times becuz one does not have a family to belong to, and needs to be relocated from time to time. that would be sad for me.

I like the name Enrique. Indeed it makes you think of old Spanish aristocrats. You could even call yourself Don Enrique! :-)

In any case much more beautiful than Eric, John or Joe ! (or Sidney :-)

Hi, Senor Enrique, just like you my name doesn't sound too good either while I was growing up. It's Rogelio and really sound old fashioned but you know what, when I changed my citizenship, I was debating whether I should change it to something else and I didn't. My reason was simple, my name was given to me by my late father (May God bless his soul!) and I want to honor him by keeping my name as is. Thanks!

Catherine is a nice name as well; quite a popular name in New York, actually.

I'm glad your lola didn't feel slighted when your mom didn't go along with her suggestion :)

You know what surprised me, Bing, is that here in Manila, the kids' names are more westernized than in America. Seems like Spanish names are no longer favored.

I'm not sure how old you are, but I have a feeling you might have been named after Rogelio de la Rosa; a famous actor.

You did right by honoring your dad.

Sidney is a nice name; quite distinguished in New York because of Sidney Lumet and Sidney Poitier. I had a friend with that name but we've renamed him El Sid, because of his dashing ways with the ladies :)

Love your photos, Sidney! I've been frequenting yours and Noel's sites a lot lately.

Enrique,
I love, love, love your name. It is the same name as my beautiful baby boy's. We do however pronounce his as en-reek. But adapted the name from the Spanish name.

my name was taken from ralph waldo emerson's poem 'the rhodora'. my uncle, a literary buff picked it.

i'm the youngest in our family too and was also delegated most of the errands which was passed on from the eldest to the next, until it reached me and i had no one to pass it on to. but later i learned to take escape by feigning stomach ache, tooth ache, headache... haha!

Aha! A kindred spirit you are then, Rhodora ... hehehe. Ah, those errands.

Although I haven't read "The Rhodora," I enjoy R.W. Emerson's writings tremendously.