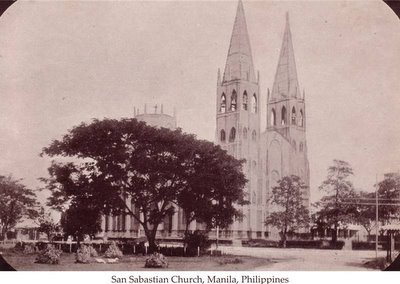 The Order of the Agustinian Recollect (OAR) Parishes Manual cited that the San Sebastian church “is the first all-iron church in the world, the first iron edifice in Asia and the second in the world after Eiffle Tower.” It has its beginnings in 1621 when Don Bernardino Castillo, a generous patron and a well-known devotee of San Sebastian donated his lot for the dream of having a steel church in Asia become a reality.

The original church, which was made of wood, was burned in 1651 during a Chinese uprising. The succeeding structures were destroyed by fire and an earthquake in 1859, 1863, and, 1880 destroyed the imposing stone of the church. The exasperated parish priest, Fr. Esteban Martinez approached the Spanish Architect Genero Palacios with a plan to build a fire and earthquake-resistant church made entirely of steel.

Ambeth Ocampo states that the present San Sebastian church was ordered knockdown in steel parts from the “Societe Anonime des Enterprises de Travaux Publiques in Brussels, Belgium. The Societe cast all the parts and shipped them piece by piece to Manila, (as what Eiffel did in most of his designs). Two Belgian engineers supervised the construction of the church which was later completed and inaugurated in 1891.

posted by Señor Enrique at 7:05 PM

I strongly disagree with the idea that the steel church of San Sebastian was designed by Eiffel.

All the sources I could find points to the fact that the Church of San Sebastian was designed by Don Genaro Palacios and build with the help of Belgian engineers. I couldn’t find a single mention of the name of Gustave Eiffel.

All sources points to following facts:

2. Finally, in 1886, the Societe Anonyme d’Entreprise de Traveaux Publics of Brussels, Belgium was awarded the contract to undertake the construction of this grandiose design.

3. The steel parts with a total weight of 1,527 tons were manufactured in the Societe Anonyme’s foundry in Binche, Belgium and were shipped to Manila during the steel temple’s fabrication phase.

4. On June 12, 1888, the ship William Burkitt docked in Manila bringing with it the first shipment of steel parts of the church.

5. For two years, the church was assembled with local artists and craftsmen joining the Belgian engineers in applying the final finishing touches on this wonderful new church of steel.

6. The idea of fitting stained glass windows in the design of the Basilica was conceived by Don Genaro Palacios, architect of the edifice. While in Belgium monitoring the progress of the fabrication phase of the church, Don Genaro was very much impressed by works of the Henri Oidtmann Company, a German company, a German stained glass firm which had won in international competitions in the 1880’s.

I would really appreciate if Miss Findelle de Jesus could give us her sources. I can’t find any hard fact or any sources backing her sayings. In the meantime I assume that Gustave Eiffel’s claim on the church of San Sebastian is a hoax.

It has its beginnings in 1621 when Don Bernardino Castillo, a generous patron and well known devotee of San Sebastian donated his lot for the dream of having a steel church in Asia become a reality.

How could this guy have a dream of a steel church in 1621?

Whoa! What an astounding revelation. Perhaps, I ought to alert my sources.

Yes. Everything Sidney said was right. Genaro Palacios is the designer. And it's even younger than the Eiffel Tower.

I think the only connection to Eiffel is that he may have used the same Belgian steel company to manufacture some of his works. But that's it. He didn't design San Sebastian at all..

Thank you very much, Carlos, for sharing with us your input. We truly appreciate it.