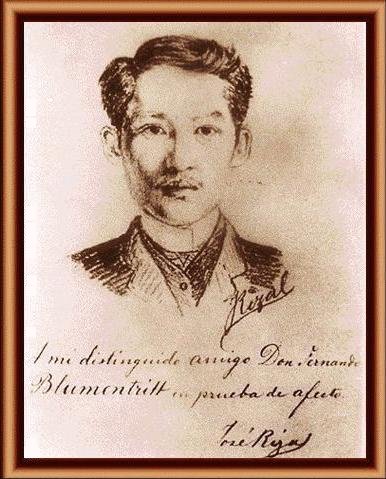 Rizal’s nationalism is based on the whole of reality, not on fragments of reality. He saw wickedness in both master and slave, in both the rich and the poor, not just in the rich. Rizal’s nationalism is open to anything that could give his countrymen human rights; the basis for peace and progress; assimilation into a mature, foreign government included. It is not focused on just one independence or separation from any foreign government no matter how benevolent.

Rizal’s nationalism recommends a change from immature, defective thinking to mature, sensible thinking via enlightenment or revolution of the mind. He did not recommend a change of defective government systems or defective leaders via revolutions, rallies or strikes.

There's The Rub : A Century Thence
by Conrado de Quiros

It's the first time I've seen that drawing of Rizal. Is that a self-portrait?

I read Indio Bravo, by Bantug, Ventura, and Bencab. It's a great read if you like books on Rizal; the illustrations are also top-notch.

May you and your loved ones have a Happy New Year, Senor Enrique!

This reminds me of a friend who looks up to Rizal, the Hero. He wrote an article in our high school website at this page: http://cpgarciaclass82.homestead.com/InnerVision.html

I noticed that you featured different heroes in the 3 previous posts. I guess each and everyone of us has different perspective of what a real hero is.