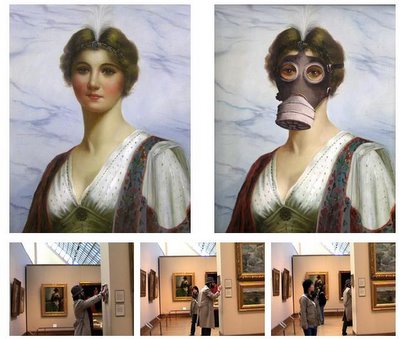 He is Britain’s most notorious “art terrorist” who specializes in sticking fake objects to the walls of major museums and galleries and waiting to see how long it takes for curators to notice. He has been a major source of embarrassment for New York’s The Metropolitan Museum of Art and Museum of Modern Art, as well as the British Museum.

Banksy prefers to remain anonymous due to several pending arrest warrants, but he is believed to be Robert Banks from Bristol. Donning a fake beard, prosthetic nose and hat, he would enter a museum with his modified cheap oil painting and then glues it on a wall. He claims that it’s easier to get forgiveness than permission.

Banksy also believes that in the future we all could be anonymous for fifteen minutes.

posted by Señor Enrique at 1:20 PM

This is somewhat similar to he movie of Pierce Brosnan. Just can't remember the title.

The only difference is that in the movie he robs the museum of the most priceless item.