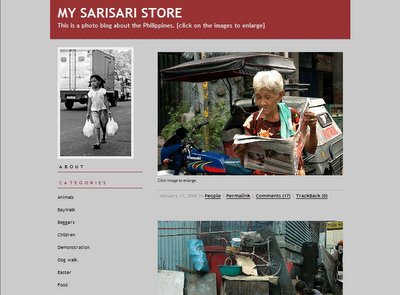 Many photo bloggers and fellow members of pinoyblog.com are already familiar with Sidney’s photo galleries and may wonder why I’m featuring his site.

You see, I’m doing it for the benefit of my friends and relatives living abroad who keep asking me to email them pictures of Metro Manila. I thought it would be better if they go directly to MY SARISARI STORE and enjoy a whole lot of them. Besides, Sidney has the eye for capturing the many facets of our city.

posted by Señor Enrique at 9:51 AM