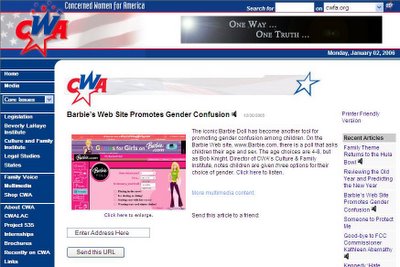 Parents beware! Barbie may not be as innocuous as she seems. The religious right has gone to war against the doll for promoting "gender confusion."

Bob Knight, the director of Concerned Women for America’s Culture & Family Institute claims that children aged four to eight are given three options by Mattel’s Website for their choice of gender. Better think twice then before giving your precious little princess a Barbie doll lest you want to risk her becoming a degenerate bisexual or a lesbian; that is, if CWA is to be believed.

Poor Barbie, there was a time when she was under fire from the feminist movement about her impossible to attain physique while some religious groups attacked her career choices. But for crying out loud, Barbie is an inanimate plastic object!

The previous culprits fingered by the religious right for having promoted sexual deviancy were SpongeBob SquarePants, Tinky Winky, and Lenny the Shark. The anime characters may soon be next considering their stylish wardrobes and hair dos, or are they too violent and misogynistic to be a threat?

Makes one ponder what the Concerned Women for America’s true agenda here is.