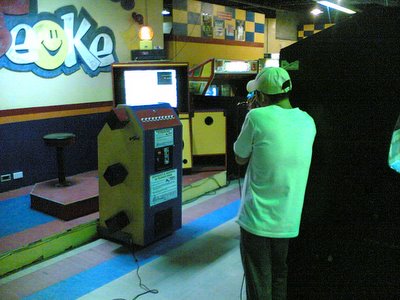 Omar has been sitting for quite some time now on the bench by the videoke machine at SM Manila’s third floor. There's a young man singing a number of original Pilipino music or OPM tunes as they’re commonly referred to. Omar wasn’t so much captivated by his renditions, but simply lost in thought. He is thinking how life can be as deceiving as some of these popular pop tunes. The beat is infectiously bouncy but the lyrics of the song itself, if one only cares to pay a bit more attention, usually speak of despressing heartbreaks.

His thoughts then turned to his upcoming high school reunion. He always enjoyed these festive opportunities -- to mingle with old friends and trade personal updates. One of which was Roger who used to talk endlessly about his handgun collection; the other was Willy, although a resident of Los Angeles, would make it a point to come home every year to attend this get-together. Unfortunately, Roger and Willy won't be attending this year.

Roger recently died from multiple gunshot wounds. It was because of a fracas over a minor traffic incident somewhere in Cavite. Roger was always quick to pull out his 45 to intimidate the other person into accepting the blame for whatever caused the incident. Standing at no more than five feet five inches, a handgun has always been a psychological quick fix for Roger to gain a grander stature. However, he wasn’t one to pull the trigger; it was all for show. Unfortunately, this time, the other driver had a handgun as well. He panicked when Roger pulled a gun to his face, so he grabbed his from underneath his seat and unthinkingly opened fire on Roger. There were eyewitnesses to vouch for what he claimed to be an act of self-defense. He was never charged for Roger’s death.

Willy, on the other hand, had a falling out with his wife of twenty years. She has recently filed for a divorce. The couple had been living way above their means and has been accumulating so much debt; the stress of which consequently affected their marriage. They had no other choice but to file for bankruptcy. Their assets had to be liquidated and distributed among their creditors. Gone are the gold cards to absorb the costs of Willy's airfare and luxury hotel accommodations. Neither can he afford to sustain the image of the affluent balikbayan as he used to flaunt all over Metro Manila. Therefore, no reunion party for Willy this year.

As Omar sat there on the bench by the videoke machine, he thought about his friendship with both Roger and Willy. The whole thing wasn’t actually built from admirable human traits; it was more a relationship founded on jealousy and competition. They feed off from each other's insecurities and inadequacies. And so as to gain a couple of notches ahead of the other two guys, Omar married someone not out of love but for her money. Much like Roger’s affinity for handguns, a rich woman was what Omar needed to obtain a grander stature in life.

However, Omar’s ulterior motives backfired on him. For one, his in-laws immediately detected his spurrious intentions from the onset. He was never fully accepted; merely relegated to hang on the fringe of the family circle. His wife eventually wised up and realized his falsehood, but remained too ashamed to admit it to her friends and family. She would, however, manifest her deep-seated resentment by sometimes publicly ridiculing Omar.

She has also seen to it that Omar never had any say or access to her money. Actually, she would even demand from him whatever little money he earns as an attorney, and hand him a measly daily allowance from which. She argues that since she allows him the use of one of her cars, there is no reason why he can’t come home for lunch, or better still, pack a lunch bag. For her, it has always been my house, my cars, or my every thing; rarely would she say ours. It was her preferred manner of speaking meant to belittle her husband.

Without the full support of his wife and her family’s influence, Omar’s law practice languished from the start. He was reduced to mostly taking on no-win criminal cases, as well as insoluble family land disputes. Most well-known law firms, afraid to invite his wife’s family’s wrath, shied away from hiring him. Although a gradute of a prestigious law school, among his peers, Omar has the dubious distinction of being at the bottom of the success ladder.

Fate may have deprived Omar with a loving support system, but his tenacity enabled him to make the kind of money he dreamt of although undesirable the means. Last year, a criminal case he was handling changed the course of his legal practice. It was a tough case, but his riveting courtroom arguments based on his exhaustive research of the case proved irrefragable. Omar could almost taste a stunning victory in the offing, but at the last minute sold out. He accepted a sizeable amount of money from the defendant’s family. In exchange, he deviously steered the remaining critical aspect of the trial against his client. And from that time on, Omar began to sell out his clients for a fee. Although a number of unethical trial attorneys benefit from his nefarious conduct, no one dares to be seen in his company.

Sadly, it is only in his annual high school reunion that for a few hours Omar could feel like a regular person. Reunions tend to highlight the past more so than the present so he feels quite safe and sanitized in such gatherings; besides, everyone is totally oblivious to what had become of him.

As the young man at the videoke starts to sing his final song, With A Smile, by Eraserheads, Omar slowly got up to head on over to the escalator that would take him up to the fourth floor. Inside the mall's south end men's room is a man waiting for him, an opposing attorney's assistant whose client had agreed to the price he demanded. He has a brown bag to discreetly hand over to Omar.

Tomorrow, Omar will turn fifty. He’s thinking of heading over to Glorietta that evening to buy himself a solid gold Rolex for his birthday. Surely, his high school buddies will be impressed when they see him wearing it at the upcoming reunion party. “Too bad, Roger and Willy won’t be there to see it,” he thought to himself.

Another great short story!
I really enjoy reading them. I am sure you would easily find a publisher eager to publish them.

By the way, I looked at your pictures at Flickr and I see that you are a talented photographer. You should post more of them !

i wouldn't be caught dead "videoke-ing" in public. haha!

This reminded me of a high school classmate who got assaulted when he was riding a jeepney with his wife just this December and it also happened in Cavite (Dasmarinas). This classmate had confided in another classmate that he was planning to acquire a handgun, which this other classmate advised him not do. I don't know what happened. I hope he did not push through in getting the gun.