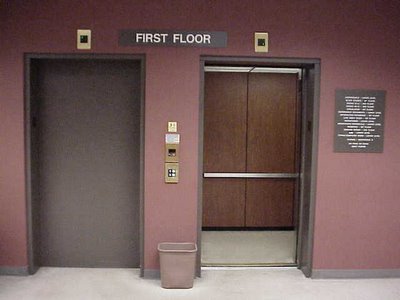 Who would ever think that creating an entire section of a website devoted exclusively to expounding elevator etiquette would ever be necessary in this time and age? Surprisingly, The B.F. Bluford Library does seem to think so.

However, based on reader reactions, providing reminders about basic common courtesy tend to evoke unpleasant experiences or instigate sarcasm as in the following:

If you are going up or down one floor, use the stairs! This rule should especially be observed during peak traffic times like morning and afternoon rush.

1. When you have a cart, stroller or large packages
2. When the elevator is empty
3. If you are disabled or injured

Noah Says:
I once took an elevator up 40 floors to visit a friend in a large office building. Once I stepped off, I realized her office was on the 42nd floor, not the 40th. My mistake. I decided to walk up the extra two floors. I entered the stairway and walked up. However when I tried to open the door to exit the stairway, it was locked. That was frustrating. I walked down one floor. Locked. I walked down the the 40th again. Locked (yes, it locked behind me when I walked up originally). 39th floor - locked. I started to get very nervous that I would never escape - or that I would have to walk down all 40 stories. Finally, about 15 floors down, I found a door that was open. I will never take stairs in a large office building again unless I am personally familiar with the building.

Anonymous Says:
Yeah, but how do you know when the elevator’s going to be empty?
Is it ever acceptable to pretend to have a slight limp?

Alex Says:
Some places, especially some medical buildings, seem to be designed with elevator use in mind. I once spent 30 minutes trying to find the stairs in a small medical building (it was a 2-story building.) In the process of doing that I came across about four elevators. I could’ve used any one of those elevators, but by that point I was trying to find out if the bulding even had any stairs. In short, this rule only applies in cases where the stairs aren’t hidden or reasonably accessible.

americanboomer Says:
as a member of the ‘me’ generation, let me educate you that i quite don’t give a sh** about anyone else in the elevator. if i have to go one floor you will wait for me. i don’t care if i have to go a 1/2 floor and you just broke your water, what is important here is my comfort, my feelings, and my self-esteem. using the stairs is for the lower class; i will never subject myself to that!


All right, so what's my take on this whole thing? In any given situation, exercising common sense along with basic decency should make our life's travels a lot more pleasurable.

I am not sure if the american boomer comment is sarcastic or his real viewpoint of his rights. In any case it reflects very well the mentality of a lot of people.
I agree that a little courtesy in daily life would ease a lot of stress in big cities.

A bit off topic. I am surprised by the lack of courtesy in Metro Manila's traffic . Almost nobody will let you pass voluntarily and if you give way nobody will thank you. :-(

this is funny. i can bear with the promdis who leave their slippers outside than with people who cannot exercise common sense and decency.

I don't usually look for the stairs even if I'm going up or down just one floor. But if I see heavy traffic in the elevators, I would use the stairs.

Or if I had to go several floors, I wouldn't even try to squeeze myself in a full elevator. I'd wait for the next one. I hate it when people try to get on a full one.