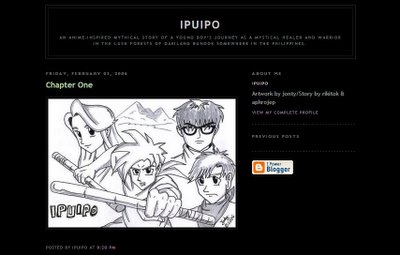 Ipuipo is a mythical story about a young boy’s journey as a mystical healer and warrior in the lush forests of Dakilang Bundok somewhere in the Philippine islands.

The story begins when the local medicine woman discovers an infant abandoned by the bamboo tree. Unable to trace his provenance, she raises him as her own and later teaches him all the rituals and secrets of mystical healing. Ultimately, the boy must find himself so as to realize his potentials and purpose, as well as seek out his true origins.

Created by avid fans of Japanese manga and anime who were excited that a number of their favorite animations are produced in the Philippines, but dismayed that to date not a single Philippine-based anime has ever been created. They have, therefore, decided to create a Philippine-based anime-inspired story and use a blogsite as their primary medium. Ipuipo is the result.

posted by Señor Enrique at 6:07 AM