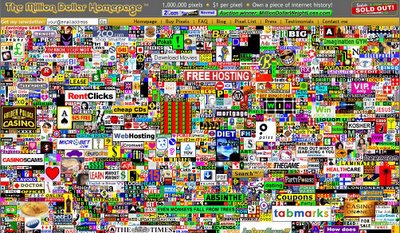 The Million Dollar Homepage is a prime example of an excellent alternative to Google’s AdSense; in generating legitimate extra cash from the Internet, that is.

Alex Tew was grappling for a solution to finance his schooling when he came up with the idea to sell the pixels of his Website for $1 each. He launched it last September, and just last month, he had auctioned off the last 1,000 pixels on eBay Inc. His total take: a cool one million dollars! I wonder how many AdSense mouse clicks will it take to earn this kind of money.

Inititally, Tew hawked his pixels to friends and family, but attention snowballed as the project progressed. Various businesses started buying his pixels as ad spaces. However, no online project of such simplicity and success goes unnoticed and unscathed by the angry at heart. Since Tew started receiving wide media coverage, his site has been getting its share of malicious distributed denial-of-service (DDoS) attacks from various hackers from Asia to Europe.

According to a Computerworld article, there has been so much traffic to this 21-year-old’s site. "At times, it surges 200Mbit/sec.," said Russell Weiss, vice president of technical services at InfoRelay Online Systems Inc., which hosts the young man’s site under its Sitelutions service.

Alex Tew intends to have the site up and running for five years. However, he prohibits those who have purchased from him to sell or auction off their pixels.

posted by Señor Enrique at 9:02 AM

wow. wish I thought of THAT.

i've read about tew and his website a couple of times since last year. genius!