THE OTHER ROY LICHTENSTEIN 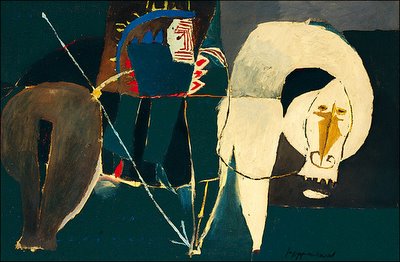 Something you may not know about Roy Lichtenstein: his fascination for America’s Old West, especially with American Indian art. It is evident in his earliest works, as well as in his Surrealist series created during the ‘70s. These were kept at the backburner by Lichtenstein and his dealer, Leo Castelli, because they preferred the public to remain focused on his signature Pop style.

At the artist’s show at Montclair Art Museum, Roy Lichtenstein: American Indian Encounters, a group of Indian-themed Lichtensteins are on exhibit along with Indian artifacts from the museum's own holdings, including a few of the books from the artist's own collection that inspired him.

The show was produced by Gail Stavitsky, the museum's chief curator, and Twig Johnson, its curator of Native American Art, in conjunction with the Roy Lichtenstein Foundation.

Roy Lichtenstein: A Pop Artist's Fascination with the First Americans
An art review by Grace Glueck, The New York Times

Great info and sites. Many thanks for sharing.