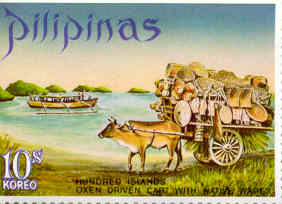 Looking at this antiquated image of a local postage stamp reminds me of a bittersweet high school memory. My sophomore English teacher assigned each one of us a name and address of a student in Japan as a pen pal. It was supposed to develop our social and correspondence skills. I was assigned to a girl named Riyoki who lived in Tokyo with her parents. It was a very pleasant relationship. We exchanged letters at least once a month; talking mostly about our respective experiences as high school students.

Most friendships of such nature lasted only during that particular school year, but ours extended for another two years. So, on planning my trip to New York, I had requested the travel agent to arrange a couple days for me to stay in Tokyo so I could hang out with my pen pal and her friends in Ginza; a district in Tokyo which she raved about. Riyoki was just as excited to learn I was coming over to visit her city.

My sister helped me pick-out a nice native wooden sculpture to give to to her as a present. As soon as I arrived in Tokyo, I requested the assistance of the hotel concierge to call her for me. She wasn’t home so we left a message. She didn’t return my call so, on the next day I asked the concierge to call her again. She wasn’t home again. Finally on the day of my departure, I just handed the concierge my present and asked him to call and leave a message for her to pick it up. I also told him he could keep it in case she didn’t come to get it. I could tell from his face how sorry he felt for me, but I just gave him a nice warm smile as if to suggest that I’d get over it.

About six months thereafter, I received a letter from Riyoki in which my sister had forwarded to my New York address. I had already gotten over my disappointment by then, but somehow I just put the letter in my desk’s drawer with the intention to read it another time. Unfortunately, I had totally forgotten all about it. I guess it must have been the excitement of being in New York and making new friends and all. I didn’t see the unopened letter again until about two years later when I was moving into a new apartment; it was buried deep inside my desk drawer. I never opened it. I thought it was better to just let it go.

Aww, I would have read it.

It wasn't after I've posted it when it occured to me that it may sadden some folks being, as you said, it's vday, melai. Sorry. But it was fun having her as a pen pal for a couple of years; I should have expounded on that aspect a bit more, huh?. :)

Come to think of it, niceheart, you got a point there -- I should have. But I did manage to enjoy Tokyo anyway and actually, had some interesting experiences I must post next time. :)

Curious lang... did you NOT open the letter because you were already excited about New York or because of the disappointment?
Isa pang tanong...you knew her address, why did you not go there instead of waiting in the hotel?
But despite my questions bilib ako sa yo for being able to "let go" and not opening that mail... mahirap yon!!!

A bitter-sweet story. I am not sure I would have opened the letter...

I didn't go unannounced to her house, because the plan was for me to meet her and her friends first in Ginza and spend that Saturday afternoon just hanging out. I also needed a coat and they were supposed to help me shop for one. I suspected that perhaps her parents didn't allow her to meet with me in the end. As for the letter, it might have been both -- the excitement of being in nyc and leting go as well.

That's how I felt when I received it, Sidney, although we had fun exchanging letters for a couple of years.