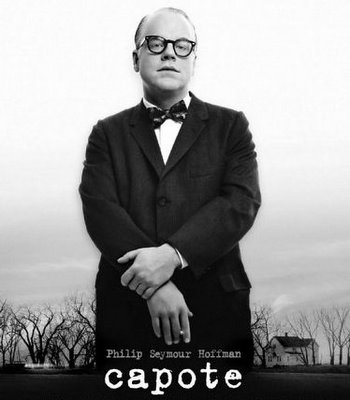 A highly-esteemed literary figure, especially among baby boomers, Truman Capote was best known for his Breakfast in Tiffany’s and In Cold Blood (both works have been turned into films).

He was undoubtedly a prolific writer; a regular contributor to The New Yorker and other publications, as well as having been rumored to have ghost-written the entire book, To Kill a Mockingbird (his friend, author Harper Lee's novel). However, right after the publication of In Cold Blood, he went dry. His effort in writing this book, which eventually became an international best-seller, was the singular event of his life featured in the film, Capote.

The movie appears limited in scope. Its basic premise deals with the main character, Capote, developing friendship with the convicted murderers with the intention of writing an accurate explanation of their heinous crime — the murder of a family of four in rural Holcomb, Kansas. The murderers, on the other hand, welcomed his friendship; they were hoping to gain absolution through this book he was writing, as well as through the author’s purported intimate friendship with certain influential people, win their appeal for a lighter sentence. Hence the bizarre bond between Capote and one of the murderers, Perry Smith, became the highlight of this movie.

Philip Seymour Hoffman’s superb portrayal of Truman Capote as a flamboyant literary figure of New York's cafe society with a high-pitched lisping voice tinged with a Southern drawl was absolutely worthy of a Best Actor Oscar nomination. The film’s screenwriter, Dan Futterman, was also nominated by the Academy.

What others may not know is that Philip Seymour Hoffman, Dan Futterman, and Bennett Miller, Capote’s director, have been friends since their teenage years. And while at NYU, they’ve made a drunken pact that whoever wins an Oscar later on in life, would bark their acceptance speech; that is, not bark only for a couple of seconds, but throughout his entire allotted time until pulled out from the microphone. Hoffman revealed this pact publicly while a guest of David Letterman recently.

For this year’s Academy Award, I am rooting for either Philip Seymour Hoffman (Capote)or Joaquin Phoenix (Walk the Line) to grab the Best Actor award. However, after knowing about this drunken pact, I’m now exclusively rooting for Hoffman simply because I’d like to see if he’d actually make good on his agreement to bark his entire acceptance speech.

I've been a fan of Philip S. Hoffman eversince and really thought he's a great character actor. It's a good thing he has been given his fue to act as lead! looking forward to this.

But I'm still for Joaquin Phoenix to get the academy for his portrayal as the legendary country icon.

I agree with you, Rey, Joaquin Phoenix did a great job in Walk the Line.

Philip S. Hoffman, much like Geoffrey Rush, is not your typical matinee idol with stunning good looks, but he's an incredibly talented actor. I am a big fan of both.

Joaquin Phoenix first caught my attention in the 1997 movie, Inventing the Abbots. He was a mere teenager then, but a hunch told me he'll become a great actor someday. He won a Golden Globe recently; the Oscar might be next. Let's see.