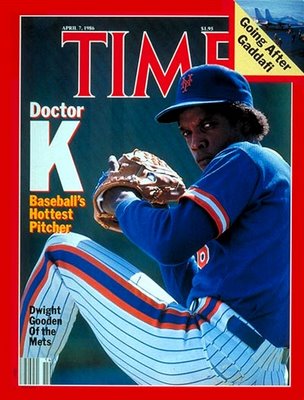 It saddens me to read about former baseball star Dwight Gooden having another brush with the law. According to a New York Times article, he was ordered held without bond the other day and faces up to five years in prison for violating the terms of his probation. He pleaded guilty in November to speeding away from police after a DUI traffic stop in August 2005 for which he was sentenced to three years probation. On Tuesday, he went to a regular meeting with a probation officer where he admitted to once again using cocaine.

Dwight Gooden was once the toast of New York City. He set a major league rookie record with 276 strikeouts in only 218 innings. The strikeouts earned him the nickname Doctor K. He tied the major league mark for strikeouts and instantly became the New York Mets' ace and made them overnight contenders. He was the youngest All-Star ever in the history of major league baseball. He was voted Rookie of the Year in 1984 and won the Cy Young award in 1985 with the "pitcher's Triple Crown," leading the National League in wins and strikeouts.

And then as if suddenly, his troubles with cocaine started making headline news.

I met him once — at the backstage party of Patti LaBelle’s concert at Madison Square — right after his release from rehab. I didn’t really have much to say to him, so after shaking his hand and wishing him luck, I moved on to join my friends. I was surprised at how shy he was.

To this day, Dwight Gooden is one of those troubled stars who would make me wonder what sort of inner turmoil could be so overwhelming that would make gifted people like him resort to illicit drugs just to alleviate it. And in the process, jeopardize everything they had worked so hard for in life.

I had been drawn to Major League baseball already in the 90's so I am vaguely familiar with Dr. K. Maybe, i'd know more about him starting from now on. My favorite pitcher is Roger Clemens of the Astros, ever since his Yankee days.

Actually, Major Tom, I'm more of a basketball than baseball fan, but on certain occasions, I would go to see a Met or Yankee game with the kids. Nothing like being in a stadium filled with thounsands of fans. Yes, Roger Clemens was a New York household name; a star!

I think it was against the Astros when Dwight Gooden first demonstrated his pitching prowess as a pro.

It is not easy to be a star. I guess there is a lot of pressure...too much for some.

A good example was this L.A. Clipper center (forgot his name) who had a hard time losing weight. Finally, he confided to management that his family and other relatives would constantly hound him for money. Unable to express his true feelings, he sought comfort from food. When he was unable to work out his personal dilemma and keep in shape to become the pro player that he was being paid for, he was let go by the Clippers. Sad but true.