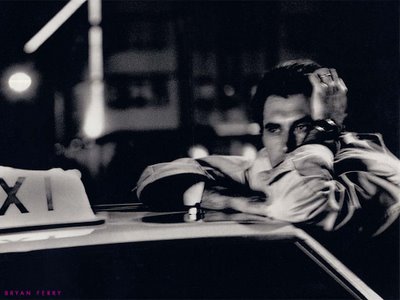 I was pleasantly surprised one hot summer afternoon when my best friend called to ask if I wanted to see a concert at the Academy of Music by the English rock group, Roxy Music; he had an extra ticket, because his friend from school he originally planned to go with was unable to make it. I said sure.

I went without knowing anything about this group, but then again, that’s basically how it goes in New York at any given season. With so many happenings, it's virtually impossible to keep abreast of everything. In the music scene alone, from the city's grand halls to the seedy hole-in-the-wall downtown bars, there's always a gig somewhere that's worth checking out. Also, especially when it comes to music, I've always preferred going to a concert with an open mind; unfettered by some jaded critic's opinion.

On this particular evening, though, from entering the Academy of Music until we were seated, I couldn’t help but notice a rather unusual sight: quite a number of females in the crowd were glamorously dressed; somewhat reminiscent of Hollywood's 1940s glitter era. This was supposedly a rock concert for kids who favor T-shirt, jeans and the occasional loose joints. I was astounded. And it wasn’t until Roxy Music came on stage and performed their music that everything made sense to me.

The group exuded an image of veritable charm and glamour while their music echoed nostalgic romance and elusive love. They were absolutely enchanting. I was hooked as a fan from that moment on.

Bryan Ferry was the founder of this glamour rock band whose initial efforts to shop around their demo tapes to record companies were met by a string of rejections. However, the group won the heart of Jon Peel, Britain’s most respected and popular radio disc jockey, as well as the attention of the weekly music newspaper Melody Maker. Their perseverance eventually paid off when they were signed by EG Management.

When their debut LP was released, much to the chagrin of their detractors, Bryan Ferry, Brian Eno, Andy Mackay, Paul Thompson and Graham Simpson — collectively known as Roxy Music — became overnight stars. Theirs was the most stunning and stylish music; ushering in Britain’s New Wave music phenomenon.

According to Wikipedia, “the group is noted for their combination of idiosyncratic experimentation and sophisticated wit, evident in their literate lyrics, restrained instrumental virtuosity, and highly developed visual presentation (mainly directed by Ferry) which expropriated imagery from the realms of high fashion and commercial photography.”

During the ensuing years, Bryan Ferry also pursued solo recording and concert projects. He became even more popular when one of his songs, Slave to Love, was featured in the movie, 8 ½ Weeks. In June 23, 1977, he performed his first New York solo concert at The Bottom Line with Chris Spedding on guitar; the show was opened by Talking Heads. This particular event became the impetus in my working in the music industry.

There were many songs produced by Roxy Music and Bryan Ferry, but if I had to choose only one as favorite, it would have to be Avalon.

You got that straight. Avalon, for me is the best Ferry song.

Glad to have found a kindred spirit, Rey.

BTW, my friend who turned me on to Roxy (and Bryan Ferry, Brian Eno, et al), in reciprocity, introduced him to the music of Antonio Carlos Jobim. He remarked later on that Avalon does contain that syncopated bossa nova feel to it that is patently Jobim.

Very well done. This morning I posted my thoughts about the first Roxy Music album over at my blog Mere Words. Your comments are invited. Thanks.

I am humbled by your deep knowledge of Roxy, chidder. Excellent entry, indeed.

I'm now inspired to post about my other favorite bands from the past :)