MORNING AFTER THE OSCARS 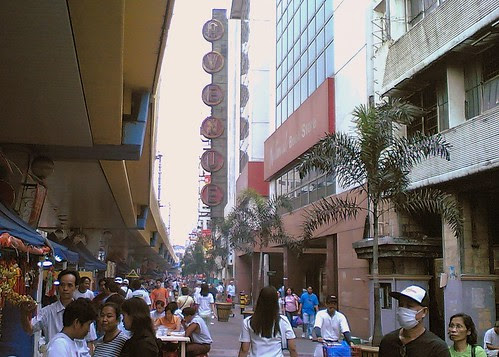 Mayor Lito Atenzia has transformed this stretch of Avenida Rizal from Carriedo Street to Claro M. Recto Avenue in Manila's Santa Cruz district into a pedestrian mall. When I was a kid, this was a bustling commercial strip; boasting a row of several movie theaters — Odeon, Galaxy, State, Ideal and Avenue to name a few. At nightfall, the signs of these theaters and various bazaars exhibited an exciting array of neon lights. It was fabulous!

Regrettably, since the aboveground tracks of the light rail transit was built along Avenida Rizal, most enterprises in the area began to lose their charm and glitter. People started to shop and spend their leisure times at the newer air-conditioned malls being built all over Metro Manila.

My father’s office was located at Florentino Torres. He would always take me along on Saturdays when he worked only until noon. After having our lunch in one of the Chinese restaurants in Ongpin, we would then see a movie in Avenida Rizal. This was how I developed a keen fondness for Hollywood movies and its annual Oscar Award festivities. Not that I’ve become a movie and Oscar geek, but watching the Oscars becomes even more exciting when you’ve seen most of the nominated films.

Ironically, in this year’s Oscars, I didn’t see the winner of the Best Movie category, Crash, which practically surprised a lot of people, including its entire cast. I was convinced Brokeback Mountain would snatch the award without a hitch. I was wrong .

I was happy for Philip Seymour Hoffman for having won the Best Actor award, but disappointed he didn’t bark his acceptance speech. Nonetheless, my hunch tells me the members of the Academy voted for him, not only for his incredibly believable portrayal of Truman Capote, but as an overall acknowledgement of his excellence as a character actor in the many films he had done in the past. He reminds me of Geoffrey Rush — not so pretty to look at, but one hell of a great actor.

I should have continued to follow my intuition and root for George Clooney to win the Best Actor award for his portrayal of a CIA operative in Syriana, but allowed the buzz to influence my choosing Matt Dillon in Crash. Lesson learned here: Don't believe the hype!

I’m sure the Internet is teeming with coverage of the Oscar awards ceremony, so I don’t intend to delve much into it; however, I just want to point out another buzz; that is, behind Felicity Huffman’s supposedly astonishing portrayal of a pre-operative male-to-female transsexual (she was among the nominees for Best Actress). I saw Transamerica and throughout the movie, a particular thought kept gnawing at me: Why didn’t the producers opt for a male actor for the role? I thought it was a definite casting blunder; unless, of course, the film was intended as a mere showcase for Ms. Huffman.

This makes me wonder how the 1999 movie, Boys Don’t Cry, would have turned out if the role of Teena Brandon (who was in the throes of sexual identity and preferred to pursue life in her male identity as Brandon Teena) was played by a male actor instead. It would somehow lose its credibility, I’m sure. Therefore, regardless of Felicity Huffman's overly-hyped performance, Transamerica would have fared better, I'm sure, had the transgender role was given to a male actor instead. Hollywood has enough talented make-up artists to handle the visual transformation.

Incidentally, Hilary Swank won the Oscar for Best Actress for her portrayal of Teena Brandon in which she was paid a measly $75 a day for a total of $3,000 for doing Boys Don’t Cry. She won another Oscar for Best Actress — acting opposite Morgan Freeman and Clint Eastwood in the 2004 movie, Million Dollar Baby. She played Maggie Fitzgerald, a 30-something, down-on-her-luck waitress who dreams of becoming a professional boxer.

It's interesting what you said about the casting of TransAmerica. Haven't seen it yet, but am planning to. I admire Felicity Huffman in Desperate Housewives.

But I have been rooting for Reese all along, although I haven't seen Walk the Line either. I love her work. I was so excited for her. And what grace and elegance she showed when she delivered her speech. It made me like her more.

I am a fan of both Felicity Huffman and her husband, William H. Macy -- great actors. Let me know what you think of Transamerica after you see it. I'd appreciate knowing about your take on it, niceheart.

Walk the Line is a fine movie; both Joaquin Phoenix and Reese Witherspoon did an outstanding job in their roles. Yes, that was some speech she made. She's one of those artists who somehow grows up before our eyes. Wonderful family she has as well.

I'm also a fan of Desperate Housewives! I think Marc Cherry is one fine writer.

It's quite true that it is such an experience to watch Oscar-nominated movies. In my case, I had to wait for them to reach video stores coz cinemas in the provinces does not usually screen those acclaimed but not-so-popular films like Transamerica. I can't wait to see all of them.

Intersexual roles seem to be a growing trend--in Boys Don't Cry and now Transamerica. Maybe it is a sign that modern society is changing fast enough to see these kind of reality in our midst.

Wish you're right, Major Tom. That these films somehow herald our society's increased tolerance not only for sexual issues, but for everything else that would make us unique individuals.

However, sometimes I think this kind of films, for the most part, can only make us look at ourselves and realize how we actually respond to certain issues -- such as what Crash does with racial prejudice.

I think Mayor Atienza did another good job. It is definitely a nice street to hang out ! BUT maybe (like Baywalk) he allows too many commercial establishments (stalls) to take over the street. They need to put a stop at a certain time. But I guess Mayor Atienza likes the tax money it generates a bit too much ;-)

Small business owners I've spoken to, Sidney, complained of skyrocketing costs of doing business in this town (permits, licenses, and etc.). Nonetheless, the mayor does a good job of his beutification projects.

I was 100% sure that Joaquin Phoenix would win, I just love his performance in WALK THE LINE and thought itwas brilliant. Imagine my disappointment when JS Hoffman bagged the Oscar.

Then I watched the movie CAPOTE last night after i cleaned my drawing stacks. And man, I just ate my disappointment. The acting does, deserve the award.

I have to agree with your assessment with TRANSAMERICA. Though Felicity does have the bones and almost a face of a gay man, he will never be that in reality-- and that took out the magic in which the movie is all about. We go to the movies to be awed. not to be lied about.

hey neat blog. Brought back memories of Manila that I visited once... remember watching the sunset over the bay. V. beautiful.

You nailed it, Rey! Any movie becomes an even more exciting experience when it's a lot more believable.

Thanks for dropping by, Wild Reeds!

Senor Enrique, sounds spanish, btw in neil from madrid spain, its nice that you features some of the good aspects of manila, and of course it was a nice blog as well. The blogosphere was so circle and i cross out with your blog and it was really nice. ill add you on my link,.

anyway OSCAR today for me it was disappointing, such a great movie doesnt win for the best picture which BB was one of my choice. Ive seen the premiere of the BB together with the author of Annie Proulx( see pic on my january post).. and TRansamerica premiere as well. Good portrayal for Felicity Hauffman as well, none the less like P. Hoffman was good. and it was a nice thing that Jake was also nominated...

I do remember the cinema in Central Market in Manila like LOVE BOAT i think.. since manila was good before of its neon light... now i dont know!

I just realized that Brokeback Mountain has somewhat of an international team of creators. Ang Lee is Taiwanese, the guy who wrote the original score is Argentine, and their cinematographer might be either Brazilian or Portuguese.

Love Boat cinema at Central Market? Whoa! I have to check this out.

BTW, my nephew who was born in NYC and grew up in New Jersey spent half of his senior year of college in Madrid; he majored in International Business. The two unmarried sisters he lived with had become like a second family to him that he now vacations in Spain regularly to visit with them.

Also, he met more Filipinos in Madrid than he ever did in his hometown in New Jersey.

"Why didn’t the producers opt for a male actor for the role?"

there's a double standard here that feminists will probably refuse to acknowledge. they keep complaining about lack of roles, but here they are stealing roles that are supposed to have been played by men. would brokeback or capote have been as effective if felicity huffman had played any of the lead roles? happy women's month! =)