OF PAIN’S VIRTUE AND PIETY 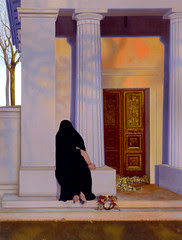 As the plane taxied onto the runway, Carol gazed at the horizon whose orange hue indicated the sun about to rise. Not too many passengers were on this early morning Narita-bound flight, but the connecting flight from Narita to Kennedy would be a full one as is usually the case, she thought.

As the high-pitched sound of the whirling engines intensified, the plane began to gain the necessary speed for a lift off. So as to assuage her pre-flight jitters, Carol thumbed through her copy of Umberto Eco’s The Rule of Four; desperately trying to find the last page she was reading. She had absent-mindedly used her boarding pass as a bookmark; however, when she pulled it out to present to the gate attendants, she lost her place in the book. What she found instead, stuck in the middle pages, was what she has been using originally as a bookmark — a 3 X 5 photograph of her 92-year-old mother and herself taken underneath the mango tree in their backyard a week ago. And then suddenly, that recurring despicable thought once again flashed into her mind — when will she die?

Despite her advanced age and intermittent bouts with arthritis, Carol's mother is fine. Except for the pills to regulate her blood pressure, she has no other prescribed medications to bother with. Her choice of exercise, which she adheres to quite strictly, is strolling around the yard during the early mornings and late afternoons. She has two maids to handle various household chores, help with her baths, and to keep her company. She's also blessed with the constant company of relatives from the province who take turns in coming over to stay in their house for extended periods of time. Indeed, she enjoys an idyllic home setting.

In addition, since about five years ago, her daughter Carol has been spending her annual one-month vacation in Manila. Being the only child, Carol absorbs all her mother's living and household expenses. These financial allotments were never a burden for Carol; in fact, she has no problem whatsoever when it comes to money matters. She earns an impressive income as a certified public accountant and has been with one of New York’s major accounting firms for more than twenty five years. Also, as a single woman with no kids and of senior executive position, she wields a far more substantial disposable income than those by her contemporaries.

Actually, Carol’s a widow; she has been one for twenty years. She and her husband were driving home from a weekend getaway trip in Upstate New York when their car unexpectedly veered and spun out of control. An 18-wheeler truck crashed onto them from behind — violently pushing their car into a ravine. Her husband died from massive cerebral hemorrhage. Carol, on the other hand, survived, but she sustained a spinal injury. Ever since regaining full consciousness at the hospital, Carol wished she had died in that tragic accident along with her husband. It was a death wish borne not by the usual survivor’s guilt syndrome, but by the excruciating pain from her injury that was to remain with her throughout the rest of her life; truly the proverbial fate worse than death.

Consequently, she developed an addiction to Vicodin; without it, she ceases to function.

A couple of years after the accident, she attempted to nurture new relationships — mostly to alleviate her loneliness — but Vicodin’s devious nature surreptitiously alters her emotional and mental stability. She can be incorrigibly petulant and unbearably sarcastic at times — somewhat tolerated in the corporate world but in more personal and intimate settings, such eccentricities can quickly erode any hope for meaningful relationships. She has been living alone in her well-appointed Upper East Side condominium apartment since the death of her husband.

Other than Vicodin, her annual vacations in the Philippines would also reconnect her with a childhood friend — now a doctor at a prestigious local hospital — who would willingly inject her with 50 mg. of Demerol upon request in return for those expensive gifts that Carol would buy her at New York's Tiffany and Cartier.

Carol can afford to give away expensive gifts. Aside from a spinal injury, the accident also left her with a million dollars from her husband’s double indemnity life insurance policy. She also received another million dollar cash settlement from the car manufacturer for its failure to duly recall their car even after it was discovered that it had a certain component known to cause such accidents.

Being a savvy accountant and a shrewd investor, Carol has more than tripled the value of her portfolio, comprised mainly of Manhattan real estate and stocks from blue chip and Internet start-up companies.

Her Philippine vacations also enabled her to regularly evaluate the amount of money she intends to leave to relatives and needy local institutions in the event of her death. If she could only permanently get rid of those excruciating pains, she would gladly trade her fortune for such opportunity. However, she is coping with an irreversible spinal injury and the pain-free state that she longs for, unfortunately, could only be attained through death. Hence, with no miracle cure in the offing, suicide has become her only viable option. She has since learned about self-induced cardiac arrest through Demerol overdose. What a blissful way to die, she thought. And if she were to pursue her plan, it would be right after her mother’s demise.

There is no definitive unit of measurement for pain; therefore, no one could possibly fathom the suffering that she constantly endures. To question her mental faculty for resorting to suicide would only be a futile attempt, especially when one has never experienced the searing pain that literally debilitates her entire being — emotionally, physically and spiritually. Indeed, such continual torture has warped her perspective on death and dying. She now equates suicide as simply akin to abortion. The pain that perpetually torments her is just as insidious as a repulsive incestuous rape; thus, she argues to herself, suicide becomes a fully justifiable choice. But no matter how Carol had deduced such final solution to her dilemma, nothing can be so hideous as to wish for her own mother's early passing so as to realize her own death wish. This is how her pain had ultimately corrupted her soul.

At this point of her life, she had given up on finding virtue and piety from her pain and suffering. Her dependence on painkillers had put her in the same league among hardcore, low life crack addicts who frequent skid rows. Ironically, this is her only means to make her life manageable.

Truth be told, Vicodin and Demerol do not completely eradicate her pain; in fact, the pain remains. Those analgesics only divert her attention away from the torturous throbbing sensation which seemingly paralyzes her entire being. This is the simple reason why painkillers become highly addictive. They offer a soothing cerebral sanctuary; a respite from what feels like a cursed and deranged human existence.

Sitting for long periods of time often trigger painful spasms in her lower spine area, so Carol popped two more Vicodin pills prior to disembarking when her plane landed at Narita Airport. Regrettably, an airport terminal is not the ideal environment to be stuck in when you're entranced in a mild opium-like state of delirium. The one hour waiting period in between flights dragged on as if in perpetuity. When she finally boarded the New York-bound flight and found her seat, all she could think of was taking a nap. She didn't have to expend too much effort; her incredibly comfortable first-class seat soon lulled her to sleep.

Unbeknownst to Carol, the passenger assigned to take the seat next to her is a New York-based medical doctor, a divorcé of about the same age as she. His revolutionary book on pain management was recently published and he was in Tokyo for a week-long conference; he was its keynote speaker.

The doctor was immediately drawn to her, and felt somewhat embarrassed when he found himself glancing too often at the slumbering Carol. It’s a long flight, he thought. They have ample time to chat and get to know one another later on.

Meanwhile, back in Sampaloc, Manila, Carol’s mother had just finished her mid-morning prayer. Like all mothers with distinct connection with their children, her intuition suggests something is troubling Carol. But since she has been keeping whatever it is to herself, the only thing she could do is pray for her daughter to be guided to find the perfect answer to her problem. And Carol's mother solemnly performs this daily ritual unfailingly.

Another nice short story!
You should definitely look for a publisher !

Many thanks, Sidney. However, as the adage goes: "When the student is ready, the teacher will appear." :)

me having a low pain threshold could not also bear pain for a long period of time. but i am not resorting to suicide if that would happen. i'd rather entrust everything to the One above.

I, too, have a low threshold when it comes to pain. Actually, I cringed and had to look away from watching the torture scene in George Clooney's Syriana - it was when his fingernails were being extracted with a pair of pliers. Gruesome!

this piece is so disturbingly real. an uncle experienced similar agonizing pains from an accident at his job. he suffered for many years until his death a year ago. also, dealing w/ those pains made him look much older than his actual age.

This story was inspired by two acquaintances from many years ago. One sustained spinal injury from playing high school football; the other was then a rookie NYC cop who was in a car crash while chasing a suspect's vehicle.

As with your uncle, ipuipo,the traces of having endured many years of debilitating pain were etched on their faces.

If only she had a child, probably she would have the will to endure the pain and live longer.

But then, again, that's the mom in me talking. I can't really relate because I don't have that kind of pain.

I'm an optimist at heart, niceheart, so I'd like to think that the mother's powerful love and solemn prayers would save her in the end.

I pray none of us ever experience such pain.