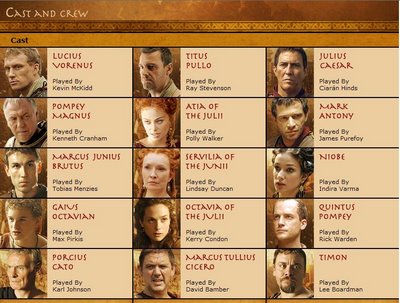 I just finished viewing the DVD box set of the TV series Rome; a collaborative effort by HBO and The BBC. It’s an incredible 12-episode depiction of the Roman Empire from the perspective of two Roman soldiers, Titus Pullo and Lucius Vorenus.

However, regardless of its historical background, parents are hereby forewarned: it contains many scenes not suitable for children (violence, bloodshed, nudity and vulgar language, as well as sub-plots dealing with incest and inter-generational lesbian relationship). Neither does watching this DVD boxset, if one had not already seen its original airing, would be a good way to relax and seek respite from our country's political fiasco; considering that backstabbing, betrayal, lusts for power and election frauds are quite prevalent in the more than ten hours of Rome.

Be that as it may, this is one riveting drama worthy of being included in one's DVD collection.

Series Outline: After eight years of war, Gaius Julius Caesar has completed his masterful conquest of Gaul, and is returning to Rome. He brings with him legions of battle-hardened, loyal men, unimaginable riches in slaves, gold and plunder, and a populist agenda for radical social change. The aristocracy is terrified, and threatens to prosecute him for war crimes if he enters Rome. The delicate balance of power lies in the Senate with Caesar's old friend, partner and mentor, Pompey Magnus.

The year is 52 B.C. Four hundred years after the founding of the Republic, Rome is the wealthiest city in the world, a cosmopolitan metropolis of one million people, epicenter of a sprawling empire. The Republic was founded on principles of shared power and fierce personal competition, never allowing one man to seize absolute control. But now, those foundations are crumbling, eaten away by corruption and excess. The ruling class has become extravagantly wealthy, with a precipitous decline in the old values of Spartan discipline and social unity. There is now a great chasm between the classes. Legal and political systems have weakened, and power has increasingly shifted to the military. Such is the situation when two soldiers of Caesar's 13th Legion, Lucius Vorenus and Titus Pullo, are ordered into the wilds of Gaul to retrieve their legion's stolen standard, the unifying symbol of Caesar's legion, setting off a chain of circumstances that will entwine them in pivotal events of ancient Rome. An intimate drama of love and betrayal, masters and slaves, and husbands and wives, ROME chronicles epic times that saw the fall of a Republic and the creation of an empire.

kay and daryl will be forewarned..

I'm sure Kay and Daryl would better appreciate it once they get older, Bing.


Not ten hours in a row, Sidney! I'd surely get cross-eyed if I did that sort of marathon. :)

I have the complete dvd set too though i haven't watched more than the 3rd disc.
and having watched the HBO airing last year, I cannot believe how much scenes has been censored. Though they tried to make it as historical as it could be, some scenes (actually more than i could count) were flawed and just added for cinematic eloquence. I found some dialogue too flowery and some unnecessary. Overall though, if you like history, sword battles, cunning bitching and "the roman ways", this is a movie worth watching. But only if you have the time.