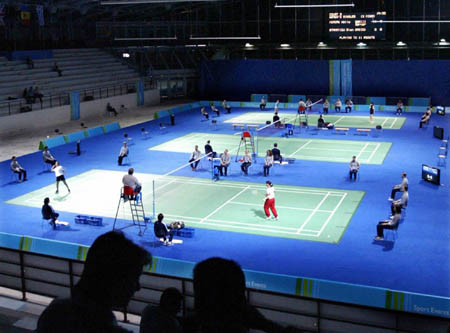 As soon as I had decided to take up badminton, I immediately signed up for lessons as I had done with the other sports I got into in the past. This way, I will learn all the proper techniques involved so as to better enjoy the game sooner. But most importantly, having a teacher helps avoid my developing any bad form or habits, which are often difficult if not impossible to correct later on.

The teacher or trainer costs me two hundred pesos per hour—a little less than four US dollars—on top of the usual court fees which vary anywhere from one hundred twenty pesos to two hundred and fifty pesos per hour depending upon which day of the week and time of day I choose to play.

However, even though I book and pay for the entire hour, I am yet to complete a full hour of instructions; only half an hour the most. The reason: the fundamental drills involved—from the basic footwork to the forehand/backhand swings—although modified and toned down for someone like me (an overweight middle-aged guy) can still be extremely exhausting. If the teacher were to bring it down a notch to make it even easier for me, I might as well just go back to golf; played more leisurely and getting a sunburn its only physical drawback. Be that as it may, I always listen to what my body tells me as a preventive measure against any injury. I know that trainers tend to push, but it’s still up to me to call the shots and stop as soon as I no longer enjoy the present experience.

It was never my intention to develop any astonishing skills to defy my true age and physical limitations. Rather, I just want to learn the proper form and techniques in order to become one with the game; much like turning it into a dance of some sort as I had done with downhill skiing and tennis.

Recently, I’ve been going for my appointed lesson/court time much earlier, as well as staying a while longer afterwards mainly to watch the advanced players. They are so limber and play with such grace despite of the intensity of their matches. One player I favor is no more than fifteen years of age yet his movements and strokes are impressive. We share the same teacher and I was told the kid hasn’t been playing badminton for more than a year. I was astounded. This proves the merits of taking lessons early on; hence, fully embodying the mechanics of this sport.

When I started, my mind perceived the oncoming shuttlecock as a deadly projectile and would involuntarily tense up. Oftentimes I would miss hitting it altogether or my stroke would be so constricted that I would fail to hit it over the net. I’ve also realized that constantly bending down to pick up the shuttlecock can be more tiresome than volleying continually for a couple of minutes. That in itself was a good enough incentive to keep improving my game.

Speaking of shuttlecocks, although the one made of real feather—which costs an average of fifty pesos each (a little less than a dollar)—rarely outlasts an hour of vigorous hits, it’s still much better to use it in the long run than its more durable plastic counterpart. The reason: plastic shuttlecocks have swifter flights and not used in standard matches. The feathered version, on the other hand, somehow slows in mid-flight; unless, of course, it was hit with a smash. A player who has learned to keenly gauge its flight is most often able to play the game in a more relaxed and graceful manner.

The only downside of my having taken up badminton is that I have to relegate my tennis to the backburner, so to speak. That’s because the techniques of swinging a tennis racquet clash with that of badminton. For one, a locked wrist is required in tennis for controlled and precise shots; whereas in badminton, snapping the wrist is a must in order to add power to a stroke, be it a forehand or backhand. I oftentimes swing my badminton racquet as if I were holding a tennis racquet; creating a high-arching slow shot, which gives the opponent an opportunity to smash it back at me. The culprit here is my muscle memory overruling my perception. So, part of my training is to retrain my muscle memory to unlock my wrist whenever taking a swing with a badminton racquet.

Incidentally, much to my delight, I was invited the other day by a more advanced player to play a friendly doubles match with his friends. Although I was elated, I declined and told him that perhaps, in another month I would be much more comfortable and ready to play with them. This is how I’ve always enjoyed all the sports I’ve participated in, as well as avoid any injuries or accidents — by always being comfortable and fully aware of my limitations; not jumping onto a higher level of play without being totally ready for it.

So, for now, I enjoy sitting by the sideline and watching the more experienced players at their game. I'm quite confident that someday soon I, too, will advance onto their level of play.

posted by Señor Enrique at 7:40 PM

You are a wise man. I think you have the right attitude. A slow , but steady improvement of your game!

I'm proud to say, Sidney, that during the many years of downhill skiing, never did I experience any accident. It was because I never allowed my ego to get in the way. Plus, I took many lessons at every start of the season; most important of which was mastering the basic -- how to fall safely.

I also have to thank my friends who got me into the sport. Although they were advanced skiers, they never urged me to foolishly ski on the more perilous trails which for them were nothing.

Enjoyed your blog. If youre interested in free weight loss tips and diet information please visit this site.

Nice blog. I will keep reading. Please take the time to visit my blog about loss weight diet