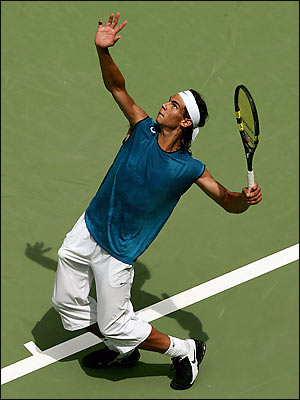 My nephew stopped by after school the other day depressed. He said he failed at the tryout to become a member of his high school’s badminton varsity team. I told him that from this point forward he could either improve his game at an even higher level, or end up a mere weekend player like most enthusiasts of this sport.

Reminded him that Michael Jordan also failed at his first high school varsity tryout. But he didn’t give up. Instead, he turned it into a challenge and practiced at a ferocious level. The following year he made it as a varsity player and the rest, as they say, is history.

Superb athletes come a dime a dozen, but those with a formidable will to win are rare and few. You can spot the latter kind by the passion and intensity they bring into their game. Dwayne Wade of Miami Heat recently demonstrated those qualities; becoming this year's NBA championship MVP.

As for the even younger professional athletes, Rafael Nadal also exemplifies this will to win. He’s currently the world's No. 2 male tennis player and was the first player since Boris Becker to reach this ranking in his teenage years. He had also become a master of the clay court for having clinched a record setting 60-match winning streak while playing on it.

Although my chances of catching him on TV are somewhat sporadic and far in between, from what I had seen so far, this young man definitely brings a certain level of excitement to the game much like what Bjorn Borg, a teenage prodigy, had done in the past. Borg became the World No. 1 tennis player for the years 1979 and 1980. His reign was cut short when he suddenly went on an 8-year hiatus.

Anyway, my nephew promised that he will keep practicing to become better prepared for the next tryout. I suggested for him to keep developing his form and style. His searing smashes and stealthy drop shops may be surefire winning shots, but he lacks litheness in his movements; at times looking awkward and brusque when executing his basic forehand and backhand strokes.

I praised him for not missing any of his private lessons last summer, which demonstrated how much he loves the sport. Hopefully, he will soon realize the merits of developing his techniques, because among other things, having those would make him a more graceful and exciting player to watch.

posted by Señor Enrique at 7:35 PM

How correct you are, Neil -- that the formidable will to win or succeed can be applied to other aspect of our life, such as in one's academic pursuits.

Congratulations on your achievements! I can imagine the frustrations you went through, but then again, your perseverence paid off -- and quite nicely, too :)

But then again, you still haven't told me how you get invited to all those glamorous film openings and star-studded parties ... hehehehe.

Funny because when i was watching the Paris Open finals on TV, I told my wife that if I were to be a tennis pro, I'd like to be Nadal. I like his gutsy, go for broke style man. I think he has more charisma than Federer in that he can excite the crowd with his powerful play. As long as he takes care of himself and avoids the burn out and injuries, he would play for a long time. Certainly a great role model for our younger generation.

I wonder what Serena Williams is up to these days. With the money she made I would not be surprised if she retires.

Good move for inspiring your nephew to go the extra mile to clinch his goal.

Rafael Nadal is the best clay court demolisher ever to come out of tennis. He's a joy to watch. And though he may not be as complete player as Federer is, His combination of raw power and relentless hunger for glory made him the champion that he is.

Judging from this kid's physique, he must have a crew of trainers whose job is to put him at optimum physical condition at all times.

And Nike must have invested millions in Nadal considering his unique clothing and accessories. A far cry from the staid, all white uniforms of country club players of decades past. I can be considered an old geezer yet, I want a pair of those shorts that he wears for when I play badminton.

If his career earnings so far is about 7 million dollars, I've a feeling he had already received a check from Nike three times more than that amount.

From what I understand the psychological stress that a tennis pro deals with can be overwhelming so, Serena may be just taking a break from all that for now.

If he makes it as a varsity player now, Rey, his chances of being the same in college would be greater, and thereby qualify for tuition assistance. At least, he doesn't have to fully depend upon his parents (who are legally separated) for his college expenses.

You defined Nadal's attributes quite well -- "a combination of raw power and relentless hunger for glory."

In life, in sports or in any or all human endeavors, it is the mental toughness that counts.

Nobody (or nothing) can hinder any person from reaching his goals except himself.

Well said, myepinoy! We can define it in so many ways, but that's what it really boils down to.

I could very well relate to your nephew. I also have an uncle who has been supporting me ever since. And in those countless times that I tried and failed, he would smile and tell me that there is always a less fortunate person behind my back who wanted to try but never had the chance.

This is Dondon BTW :)

Hi there once again, Those film openings and star-studded its just a cross path of my life.Like the premiere of Brokeback with Anne Proulx. I just went there and they give me free entrance at the end, Like having the German Actors with me, And Spanish actors, Teatres and even filipino film makers... I dont know how and i could explain it. its just that i move around from one place to another and i came across to them.. Hoping for the next one... Ill post it dont worry!

Hmmm ... your uncle certainly has an interesting way of looking at things, Dondon.

We ought to appreciate every opportunity we get and apply our best effort when given that chance.

Come to think of it, there are those who don't even get an opportunity. Worse, some are too immersed in their daily struggles to even notice when it comes.

That makes it even more exciting for you, Neil -- to continually experience auspicious chance meetings with these artists. Be that as it may, there must be something in your aura for them to be drawn to you and invite you to join their party. Marvelous!