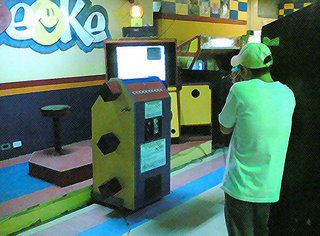 A friend inquired about my current favorite OPM or original Pilipino Music, in which I replied Ako’y Sayo by First Circle (click on the title of the song to hear its streaming version, as well as for its complete lyrics).

First time I heard it, I was reminded of a songwriting workshop I took one summer in New York. The instructor was Sheila Davis, author of the book, The Craft of Lyric Writing. This song, Ako’y Sayo truly exemplifies her mantra, which is essentially all about clarity and specificity.

Moreover, Sheila argued that to hook the audience into listening to your entire song, the first verse of it alone should immediately depict the who, what and where elements — as in the following example:

Accordingly, the first verse reveals the characters as two lovers. And although they've already once expressed their love for one another, the girl somehow seems mysteriously elusive. Interestingly, mentioning this conflict early in the story further holds the listener into sticking around to hear the rest of this lonesome tale.

Sheila also encouraged her students to make use of alliteration other than the usual rhyming of the final syllables. This is supposedly to add spice or avoid redundancy and predictability to the overall structure of your song — as in this fourth verse:

And most important of all, and here’s the clincher, the overall cadence of your lyrics should reflect the melody. Hence in the following line:

If it were to be spoken, you'll notice that its cadence does not stray too far from that of the melody; thus, a pure blending of the lyrics with the melody; making it naturally easy to sing, as well as sonically more pleasing.

This should also explain — when Paul McCartney had the melody but not yet the lyrics and title for the Beatle song, Yesterday — why he used ham and eggs for the tune's first line.

posted by Señor Enrique at 9:46 AM

Aw...that song is among my all-time favorites. I used to play that on the guitar while my gf does the singing.

BTW:
I've moved my blog to a new site; here's the new link:

Whoa, Jhay ... this song must've really provided the perfect soundtrack to what seemed to be really fun times with the gf, huh? (wink)

It's definitely a nice song. I like it so much and proud that it's an OPM that I plan to sing it at Applebee's karaoke night when I go back to visit NYC...hehehe. And who cares if the drunks in the joint don't understand a word of it?

There's another but older OPM song I really like, "Akap" by Imago. My nephew told me that it was originally written by Eraserheads for Imago. But the girls revised some of the lyrics prior to recording it.

I like it so much that I'm tempted to write an English version of its lyrics (not necessarily a literal translation of the original Tagalog) as a personal challenge.

Recently, Spain concluded the GAP (Gabi ng awiting filipino) check my previous post, which indeed i was seated at the from row with special blue card invitation. The event was so successful as the filipinos here in spain compete for senior and junior category singing OPM.Winner is from MAdrid, a choir member. and runner ups are from IBIZA.. and next year GAP european BAttle of the champions..
Since we are talking about OPM., MArtin Nievera, POps fernandez, Piolo PAscual Rica Peralejo,Edu manzano came to madrid this year and of course Louie Ocampo the best musical director.. This NOvember next batch like nanette inventor and CO...
OPM-- of course songs of Sharon Cuneta and Louie Herredia!

Oh, Neil mi amigo. You are killing me with all these talk of special invites to such grand affairs. I worked as a slave in the music industry and never got a free front row seat ... hehehe.

But seriously, this must have been a truly grand evening for OPM. And with some of the Philippines' stars in attendance as well. Wow!

I agree that this is a song full of warmth and sentimentality and the melody is just so you know, nakakabighani. I think this is an old song coz I've been hearing this song when I was so much younger.

Hey guys! I only heard this for the first time less than a year ago.

Now that you're all saying it, I tend to believe that this is an old song.

But be that as it may, it really is a wonderful Filipino song that I love.

i only heard that song mga last year lang din, señor. even then, i noticed its melodic and kundiman-like quality.

no wonder the lyrics are easy to remember - it's great songwriting!

that's one of my fave song also eric! but the original one by i-axe. :)

Ayun na nga, VINA! But then again maybe it's the version by First Circle that really popularized it and that was when we both got to hear a lot of this song.

As for the other guys, they might have already been listening to the very original by i-axe as TET had pointed out.

Now, as Tet had suggested, I will search around and check out "Ikaw Lamang" by J. Gibbs and Jana.

I'm a Kano trying to learn Pilipino with the help of my lovely bride. I'm also a songwriter working hard on learning the craft, with the goal of becoming a professional writer.

Lately, I've been wanting to write songs in Tagalog, and have tried to find a Tagalog rhyming dictionary with no luck.

Do you know of any Tagalog songwriting resources you can point me to?

Too bad, at the book fair recently was a booth of nothing but music. I'm sure they could be of some help.

Anyway, best place to start is to write an email to the library of Cultural Center of the Philippines

and inquire if they have any book you need, or you may even go there and visit -- nice complex.

I will also ask around and email you.