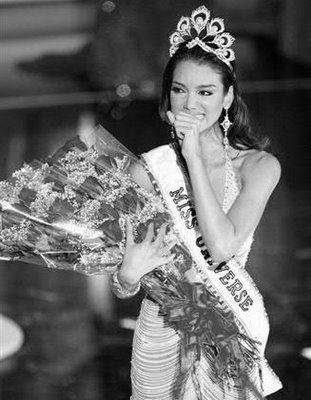 According to a Los Angeles Times’ report, the audience at Sunday’s Miss Universe pageant held at Shrine Auditorium — although all glammed up in slinky halter dresses and suits — treated the event like a World Cup final. There were lots of boisterous cheering and vigorous waving of national flags. Supposedly, they had to be admonished at the beginning of the evening to not blow their air horns.

An 18-year-old Puerto Rican — Zuleyka Rivera Mendoza, a 5-foot, 9-inch dark-haired aspiring actress — was crowned Miss Universe before a crowd of thousands, including a few hundred partisans of her country, screaming and waving Puerto Rican flags.

Besides the allure of Filipina women, I think Puerto Rican women are among the most beautiful, though they can be feisty at a fault. A word of caution: they tend to involve their family against a lover during quarrels, which means not only will you explain yourself to her, but also to her father, uncles, aunts and at times, close friends of the family. But Puerto Rican moms are the best provided you eat their home-cooked meals (always served with rice and beans) with gusto.

Following the brief Spanish-American War, the United States acquired Cuba, Puerto Rico, the Philippines, and other colonial possessions from Spain under the Treaty of Paris.

Did you watch the coronation? I heard that she passed out. From lack of nourishment? Or stress? These models and beauty contestants are pressured into staying thin. But I agree. She's very beautiful.

Oh she's just marvelously elegant...But I think I'd think a million times before picking a fight with her...

hmmmm...why do you seem to know these little details about Puerto Rican women? any personal experience with one? :P

No, I didn't watch the telecast, Niceheart; only read the news about it and was thrilled that Miss Puerto Rico had won the title!

And yes...the pressure to remain thin is definitely intense. My bestfriend's girlfriend was one of Donna Karan's and later on Issey Miyaki's assistants and she would often invite us to private shows and shoots mainly to eat the glorious food set up for the models and production staff, because not too many people would eat them. Can you believe that?

And you can't give these foods to the homeless people because it is against some NYC health code violation. They all get dumped if not eaten that day or evening.


From what I heard, Melai, Miss Japan came up with some dramatic stuff with the samurai or something?


She is gorgeous, isn't she, Major Tom? But you know how it is...unknowlingly, there is always something you have forgotten or didn't do or didn't say.... And before you know it ..... hehehehe.

Hmm. Very alluring Ms. Lia. i cant believe she didnt even on the top 20..

anyway...when will be the 3rd Ms. Universe.

I know what you mean, but in such grand pageantry, it's tough to be nationalistic because all these women are beautiful and intelligent in their own way.

Oh! that was her mistake or should I say the people behind her's mistake .... the fact that she's in Miss Universe Pageant she shouldn't play as a Japanese Warrior on stage.

I loved Miss Japan. Dang she was hot! ...and I loved her facial expressions. Miss PR was okay, but she looked wooden.

I'm glad Miss USA lost; I love southerners, but I hate the typical southern belle that tends to win these beauty contests. Their bubbly personalities are sooo... "cheerleaderish." Man, I loved Miss Japan though!

My last assignment was in New Jersey. I used to volunteer over at the 6 Flags to raise bucks for my unit. The NYC visitor contingent to the park was always heavy on Puerto Ricans. I've been to PR and its okay, but for the life of me, I don't know why they are so ebulliently nationalistic; dare I say to the point of being obnoxious? Did you ever meet someone from that island that DIDN'T have a PR flag or two on display in their car? I don't get it. But, how about that Miss Japan? She was awesome!

Would that be Great Adventure in Jersey, Phil? And yes, much like Filipinos, Ricans would come to places like it in droves (like what we did)... hehehe.

First time I went to San Juan, I had the misfortune of meeting a real cool and gorgeous PR local at a club but her two friends (would never let us be) were so vocal in their anti-American diatribes it just messed up any possibility for romance. They were schooled in Europe and refused to step foot in the US until Puerto Rico achieved independence. Jeeeez.

I missed the TV broadcast of Miss Universe and didn't get a chance to see the contestants :(