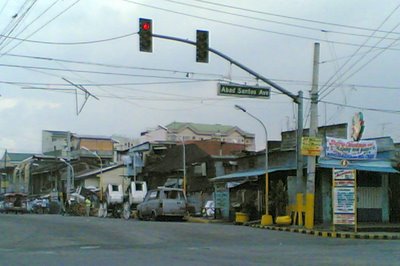 The official report indicates one dead and two wounded due to a series of shots from a .38-caliber revolver.

Of the wounded: one was hit on the left arm (treated and released) while the other remains hospitalized but awaiting transfer to the orthopedic hospital to repair a tibia fracture. He sustained a severe hit, though not life-threatening, just below his right kneecap and now undergoing heroic doses of painkiller to alleviate the intense pain that emanates from his gunshot wound.

Eyewitness accounts claimed it was late Sunday night when five remaining neighborhood teenagers were about to disband. They had just cleaned up the area in which a party was held for another friend’s birthday earlier that evening in front of his house. Suddenly a lone gunman came rushing towards them and started firing his powerful handgun. Three were felled by the hail of bullets.

Everything happened so quickly. No one ran after the gunman even though his revolver was now empty, because everyone’s attention was riveted to the fallen victims; one was shot point blank in the chest and died in the hospital. He was a senior in high school.

Ironically, the intended target hunted by the gunman escaped unscathed. He was the triggerman whose much improved accuracy with handguns killed one and critically wounded several of the other group’s members a few months ago. And this recent shooting was a retaliatory attack; a new installment to an ongoing feud between two groups of kids who live in the same neighborhood in Tondo, Manila, just right off Jose Abad Santos Avenue.

This incident drew the attention of the local TV and print news media and was given substantial exposure the following morning. Extensive scene of crime investigations were also performed both by the Philippine National Police and the National Bureau of Investigation. And although the gunman, a teenager himself, was immediately identified, he is yet to be found and arrested.

The funeral procession held a week later was pure gangsta-style complete with rap music blaring from a car's speaker system. It was one in a convoy of vehicles filled with grieving relatives and friends. And on foot right behind the hearse was a group of about a hundred or so of the dead victim’s close friends and schoolmates, as well as members of other affiliated gangs in Tondo. As planned, everyone wore a white T-shirt along with the usual silver and bling.

Although their fresh smooth-skinned faces reveal their young age, their oversized T-shirts, conceal their handguns. And beneath these masks of angelic faces is a common lust for a quick draw.

The strategy was, in case of an ambush en route to North Cemetery, the hearse and the convoy of vehicles would pick up speed and head on over to the cemetery while those on foot would stay behind to confront the enemy — to death if need be. The police was aware of this volatile situation and chose to stay away. Instead, what lined some of the streets along the way to the cemetery, were myriad youngsters enthralled by the sight of this gangsta funeral.

Possibly, just like the dead victim, some of these onlookers may have been bullied in school or in their neighborhood. And while witnessing what seemed to be a sense of brotherhood from this throng of mourners walking behind the hearse may spur some to join a similar gang for protection, or just to enhance their image of cool.

The funeral procession uneventfully reached North Cemetery, located near the border of Manila and Quezon City. However, after the customary interment ritual, all those with their 38’s and 9mm’s pulled and aimed them toward the sky as they fired three shots each as a sendoff to a fallen brother; the recent victim of this long-time series of violence between two groups of young people who are basically neighbors.

It all started way back when everyone was in elementary school. One group living in one block was constantly harassed by a band of bullies from only three blocks away. The latter, with their crudely-made single-bullet pen guns or pellet handguns would slap the faces of the kids from the other group. Sometimes they would also shoot at them as a form of amusement; to watch gleefully as their targets frantically scramble for cover.

By the time they all reached high school, the aggrieved group — having endured enough humiliation — began to fight back. Armed with guns smuggled from China and sold in the piers and with bullets from Quiapo’s underground market, they would sneak into the so-called enemy territory (a mere three blocks away) and launch surprise attacks. A month or so later, the other group would drive by on their scooters and retaliate with equally powerful handguns. At first their shots were near-misses, but eventually their aim got better, which began to produce fatalities on both sides. And so it has been for the past couple of years in this enclave of Tondo.

In yet another sense of irony, this area boasts a number of police officers as residents who appear to condone instead of condemn such violence committed if not by their own sons or nephews, neighborhood kids. And the lethal weapons brandished by these kids from both groups, other than having been bought surreptitiously, came from their kin who are members of the police force. They were unlicensed handguns confiscated from routine checkpoints or actual arrests, but were neither reported nor surrendered to their respective precinct.

There was a time when knives and arrows shot with slingshots were the weapons of choice; when horrendous crimes were confined within Manila’s indigent neighborhoods; and when the police enforced the law more so than encourage a relative to pursue a life of senseless violence. Times have changed. Most of these kids come from working-class families. Although dwelling in densely populated areas, they are not squalid shanty neighborhoods. And a fair amount of them aspire to someday travel to America or Europe to pursue a career as nurses or computer programmers or accountants.

Regrettably, these kids from both groups manifest a twisted mindset primarily fueled by a false sense of loyalty. Everyone remains inexorably determined to sustain this senseless bloodbath until the last man standing. Unarguably this is but a violent derivative of imported hip-hop culture as embodied by some of our local youth.

I knew it... Quiapo had to be in there somewhere.

It's tragic how gangs have devastated neighborhoods not only in Manila but all over the world. Big cities are not spared with this gangsta culture. Many believe that gangsta music has got a lot to do with it. Rapper 50 Cents was banned from holding a concert in Canada because of his gangsta music that encourages violence.

In one incident here in Toronto, a young man was killed outside the church where the mass for his fallen friend was being held. He just stepped out of the church for a smoke and he was wasted right there and then, at the full view of some folks who were huddling outside the church. Apparently he was a survivor when he and his friend were shot at. His buddy died and the vigilance of his assasins to take him down was startling. It must have been a payback or tyhey just wanted to silence him. It is appalling why kids have to do this barbaric thing just to extol what they call their brotherhood.

That's tragic. They were born into violence and so the life they know is kill or be killed. And it must have been that way even before the time of these gangsters because of the attitude of the elders.

It's a non-ending cycle of violence, and this time it's more fatal. So, Tondo is still the way it has been, eh?

Omy, how could we live in the place that there is peace, i mean i dont know what was on the peoples mind in killing and doing those barbaric events... "Natural born killers" as they called it... hmmm. I will it would all be peaceful then...its not like "Cuidad de Dios"