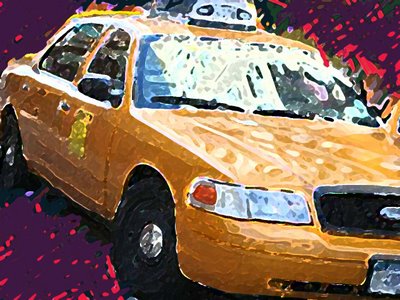 No, this is not about the local pizzeria here in Metro Manila; rather, about New York City's yellow cab taxis. Since I had posted an entry about our local jeepneys the other day, felt compelled to feature its infamous New York counterpart. Originally posted on October 17th last year, thought I’d re-post it for this purpose

One I came across was an Israeli. Since a teenager in Tel Aviv he aspired to join the Mossad. With military service a prime requirement for applicants, he signed up for a stint with the Israeli Air Force’s pilot training program. It was so intensely gruelling — intellectually and psychologically — that afterwards his frailed nerves suggested kibbutz management after his discharge might be a more suitable career choice.

At one solo flight exercise — he related as if pained by the memory — he was to fly sideways underneath a bridge; its clearance allowed just enough space for the aircraft to go through without clipping a wing.

I could only imagine that a couple of years of excessive adrenaline rush from his training turned him into a reluctant addict that upon immigrating to New York, he was immediately drawn into the perilous excitement that city cab driving offers – dodging holdups, outsmarting theft of service scams and coping with incorrigible New York pedestrians and passengers; all that while negotiating hair-raising overtakes and evading the unmerciful men in blue.

The other memorable cab driver I chanced upon was a struggling artist from Madison, Wisconsin. He was so new in the city that I had to navigate our entire journey from midtown Manhattan to Brooklyn’s Williamsburg section. He was so dazed and confused – not with the city streets but in his entire demeanor. I figured he was either an innately brilliant artist or just took fine arts because he didn’t like math. A couple of months later, a friend dragged me to a gallery exhibit opening at the Lower East Side. While working the room, so to speak, I was surprised to run into this artist/cab driver. He didn’t quite remember me but told me anyway that he had just started working for Mark Kostabi. I didn’t know whether to be happy for him or not.

A cousin's wife was insisting on hiring a personal driver for when she and a couple of their kids visit New York for a month. She must have asked every one she could think of who might know someone from over there who knew anyone willing to do the job. She finally trashed the idea when I told her the average per hour rate for a personal driver in New York is $30.00 for an 8-hour period; beyond that she will have to shell out the usual time-and-a-half per hour overtime rate. That is, of course, if the driver would be willing to work overtime. She pays no more than P10,000.00 a month for her live-in family driver here in Manila with only a single day off every week.

One of my friends in New York does that but for only one client -- a rich couple from Madrid who would fly to New York twice a year. They would rent a sedan while my friend would drive it for them for the two week duration the couple was in town. He gets $30.00 per hour plus a generous tip when they depart, which supplements his regular income as a freelance personal trainer.

posted by Señor Enrique at 6:42 AM

I've always wanted to ride in one of those signature yellow taxis of New York. Someday I will. hehe

Someday you most definitely will, Jhay! :)


I'm yet to meet a NYC cab driver of that fatalistic nature, Senorito Ako! But in Detroit, however, ... :)

Is the driving in NYC much worst than our Jeepneys

I went to college in Manhattan. One time the cab driver almost crashed into a pole. Another time, I accidentally took the wrong subway and ended up in East Harlem late at night. The taxis didn't want to stop when I flagged them. I had to call my husband, who took a cab from the west side to pick me up. It was scary.

There are some reckless yellow cab drivers in NYC, too, Senorito Ako. I also know of some people who detest driving in Manhattan because of such drivers.

But if you're a savvy Metro Manila driver, Manhattan driving should be a piece of cake for you :)


No. Aurea, yellow cabs wouldn't dare pick up random fares over at East Harlem -- too risky. However, you can catch one of those cab service sedans indigenous to that particular area, but I would think twice about it first -- not so safe, either.

You were very lucky that you had the means to call your husband to come pick you up. East Harlem can get quite dangerous at night, especially for a lone female.

Just in case ... next time you got off the wrong station, go to the token booth clerk and ask him/her to call a transit cop to assist you.