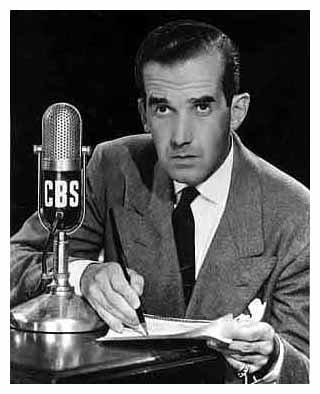 “Just because your voice reaches halfway around the world doesn't mean you are wiser than when it reached only to the end of the bar.” - Edward R. Murrow, Broadcast Journalist (1908-1965)


Edward R. Murrow is the most distinguished and renowned figure in the history of American broadcast journalism. He was a seminal force in the creation and development of electronic newsgathering as both a craft and a profession. Murrow's career began at CBS in 1935 and spanned the infancy of news and public affairs programming on radio through the ascendancy of television in the 1950s, as it eventually became the nation's most popular news medium. In 1961, Murrow left CBS to become director of the United States Information Agency for the new Kennedy administration. By that time, his peers were already referring to a "Murrow legend and tradition" of courage, integrity, social responsibility, and journalistic excellence, emblematic of the highest ideals of both broadcast news and the television industry in general.


On the silver screen: Goodnight, and Good Luck - A terrific docudrama about the Edward Murrow and Senator Eugene McCarthy duel (directed by George Clooney)

I followed the link from Pinoyblog.

Just saw the film, too. I think every media person and politician should learn from the lessons of this movie.

I hope that all of us bloggers (as part-time journalists)may be inspired by this man's irrefragable integrity.

BTW, I invite everyone to cite comparable Filipino broadcast and/or print journalists worthy of emulation.

I actually haven't seen the movie yet. i have the DVD(so with some other titles), but just don't have the time to lounge lazy nowadays.

I learned about Murrow when I was studying a minor subject, POL SCI. My teacher was an old fart but was very good in adlib-ing things relevant to what wewere studying. it's ironic that in a world of black and white tv, comes one of the most colourful personality ever to emerge in broadcasting.

I personally beleive he's the first 'superstar' broadcaster. The person Jennings and King should thank for.

It was a dark period in American history, Rey. Many lives have been destroyed by this witch hunt conducted by Senator McCarthy and his lawyer aide, Roy Cohen. Sadly, many writers who were blacklisted committed suicides.

Throughout, Edward Murrow was one of the few who risked it all by relentlessly questioning McCarthy. Indeed, Murrow was and still is an icon ... a tough act to follow.

BTW, Woody Allen made a poignant film with Zero Mostel, THE FRONT (1976). Allen played the character of a front man for Hollywood writers blacklisted during this McCarthy era.