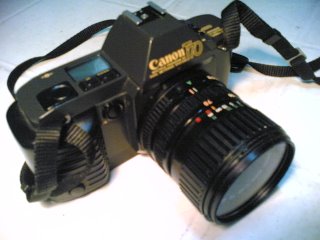 Since posting an entry last June about Canon 5D digital camera, I was somewhat dispirited upon realizing that SM Department Store was the only store to buy it from. Not that I question its reputation when in comes to electronics and cameras, but SM's price tags rarely deviate from the manufacturer's suggested retail price.

For discounted prices, Jeff of Dubai Chronicles once recommended the camera stores over at Quiapo’s Hidalgo Street. However, daunted by my lack of experience with the integrity of the merchants in that district, I abandoned that prospect.

In the interim, I grappled whether or not I was willing to lug around a bulky digital SLR camera and risk attracting the attention of snatchers as I walk around Metro Manila with it. I wouldn’t want this newly-purchased camera to reside in the closet, either; only to see the light of day on certain occasions (i.e., birthdays, family outings, and etc.). So, I considered a point-and-shoot digital camera as a safer and more portable alternative, but just the same, I only have SM Department Store as its retailer.

Nonetheless, at the back of my mind was the comment made by BW of Warped Zone. He bought a 35mm SLR film camera at an unbelievably low price and instead of prints, he has the film developed and stored in compact discs. Indeed, this is a viable alternative to a pricey digital camera.

I have a Canon T70 SLR I got from my brother. Although antiquated, it still works fine and I even have a telephoto lens for it. The only thing lacking is its flash unit — a Canon 277T. There’s a few available on eBay (US) but none here in the Philippines. When I asked around where I might find one here in Metro Manila, I was once again directed to Hidalgo Street. Not knowing anything about the reputation of its merchants, as before, I dumped the idea; that is, until I came across Chris Lagman’s blog site.

Chris has posted a very interesting and informative entry — “The Hidalgo Project” — a group effort to renovate Hidalgo Street of Quiapo as a true haven for all local photography enthusiasts as spearheaded by John Chua (a.k.a. “Magic Eye”) of AdPhoto. On July 13, John together with 72 other photographers gathered at Mayor Atienza’s office to present the project.

The group and its proposal were received with much enthusiasm by Mayor Lito Atienza. The Mayor said this is timely and gave the go ahead signal to one of his administrators to start clearing the street which is mostly blocked by street vendors. Completion of the physical renovation of the street is expected by the end of the month.

I immediately contacted Chris and he responded in kind with a recommendation as to where to go and whom to talk to when inquiring about a flash unit for my 20-year old semi-automatic Canon SLR.

I had also signed-up at PinoyPhotography with the intention to take advantage of its forums for photography professionals and amateurs alike. This site also has a directory of many dealers and merchants of Hidalgo Street. I called a couple and was pleasantly surprised to find them generous with their time and advice.

Once I have a flash unit for my SLR, I will lug it around wherever I go and see how comfortable (or not) I am walking around Metro Manila with an expensive-looking camera hanging on my neck.

I'll be getting me an SLR in a year or two. I'm thinking of getting the 4/3 lens system eh.

You know, the US sells digicams cheaper than Hidalgo. :) Do you write for magazines as well ?

This "Hidalgo Project" would surely improve the Quiapo area further, as it had been for sometime now. The underground stores/mall was much improved the last time I was there compared to so many years ago when it was almost decrepit-looking. I used to buy cheap electronic products there...

This four thirds system as a standard for digicams is defnitely a wonderful idea, Senorito Ako! Do you think Canon and Nikon will join soon?

This is the other thing I failed to articulate -- I will be paying an arm and a leg for something that may become obsolete in the immediate future due to advances in technology. However, if I were of professional caliber, I might go ahead and buy one now and trade it for a newer model later on. But I'm not; only an unpaid enthusiast. And no, I don't write for magazines. I wish I did, this way I can easily afford this high tech stuff :)

Yes, anything electronic seems more affordable in the US than in the country/continent where they were produced like in Japan/Asia.

Not only will the Hidalgo Project inspire further physical improvement of the entire neighborhood, Major Tom, but it will also encourage a much better (win-win) relationship between the merchants and consumers! And this is what I'm really excited about.

As I delve more into it (PinoyPhotographer forums, calling some merchants listed on their directory, and etc.) I am more and more encouraged to believe that this Hidalgo Project might set a precedent amongst other groups of dealers/retailers, as well as professional groups like those in the medical and legal arenas -- much to the advantage of everyone!

I am truly excited about this, Major Tom!

BTW, yes ... the Quiapo district seems to be getting better, though slowly, but nevertheless for the batter :)

Nikon and canon ? don't think so.. not yet atleast. 5D is full frame so sulit yung mga wide lenses mo. Nikon is coming out with the d70 replacement. Ebay might have some good deals on 'used' d70's.

To me. Lugging around a very expensive camera might stifle your creative eye kasi you'd be paranoid so as to 'not scratch/damage' the equipment rather than look for the actual shot. Just my 2cents.

My brother-in-law told me to invest in lenses. Camera bodies come and go but the lenses stay... assuming you are 'locked' to a particular brand.

As computer chips gets smaller the yield on computer 'wafer' becomes greater. Hence full frame ccd's won't get cheaper in time but might be more expensive pa.

Ayun na nga, eh ... I was thinking that I may be better off with my old Canon T70 because I wouldn't be so concerned about it getting scratched.

Also, in case I get mugged for it, I wouldn't even think of putting up a fight for it -- just hand it over to them.

happy to know my blog helped! thanks and good luck on your photography senor enrique! :)

You were of tremendous help, Chris! And again I thank you!

I'll be visiting your site often to look for more news, as well as enjoy your photos :)

i'm glad that you joined the forum and found out few months back as well. i hope they'll make hidalgo a real safe haven for photographers and others.

as for your camera... "indulge yourself, you won't regret it!" -- d's advocate

Thanks for stopping by, Jepaperts!

For now, hanap muna ako ng flash unit para sa film camera ko. Tignan ko muna how serious I will be about it.

There's a price to pay for the commercialization and beautification of the area. I don't think the price of camera stuff will be the same when this proposal pushes through.

Good point there, Donvito, but I tend to be an optimist in this regard -- more people will feel comfortable to patronize the shops in the area; hence influx of new customers' money will have a balancing effect. And lower prices being one of the top draw or allure, it will only be self-defeating for these stores to refrain from giving discounts.

A friend recommended this place when purchasing cameras and accesories. I wasn't able to go there and instead purchased my camera in SM North. But I heard that if I wanted to buy anything associated with a camera, I'd go here. Maybe I should go visit someday :)

And it's good that there's this 'make-over' :) It will be a nice place to visit for an amateur like me :)

Now that I'm getting to know more of Hidalgo's merchants and some of their loyal customers (pro photographers), I feel comfortable in walking from store to store; will definitely buy my new gear from this area from now on instead of SM.

My pleasure, Drawing with Light!