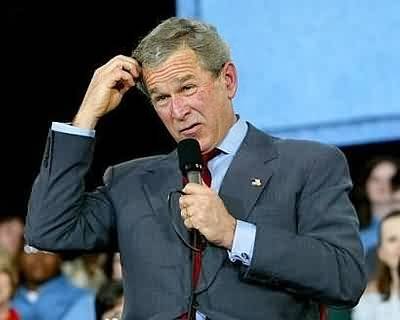 There’s a module — similar to Joke of the Day and Inspirational Quote — which I have added onto my Google page. However, this one would leave me scratching my head after reading what’s on it; unsure if true or not. It’s called The Chimp-O-Matic; created by Ryan Russon, a 37-year-old Web developer and Democrat.

This module features snippets or quotes from George W. Bush’s various speeches and bantering with White House correspondents. Now, we all know George is not as eloquent as Bill — and does come off as a blubbering buffoon at times — but he is, after all, born and raised in America, as well as a Yale graduate. Therefore, he should, at the very least, have a more coherent command of the English language than someone who had just recently eluded the border patrol. Even David Letterman has a regular segment — great moments in U.S. presidential speeches — which shows sound bites or lack thereof from George's previously-recorded press conferences and speeches.


We spent a lot of time talking about Africa, as we should.
Africa is a nation that suffers from incredible disease.


I trust God speaks through me. Without that,
I couldn't do my job.

It's important for us to explain to our nation that life is important.
It's not only life of babies, but it's life of children living in, you know,
the dark dungeons of the Internet.


I love the idea of a school in which people come to get educated
and stay in the state in which they're educated.


I'm also mindful that man should never try to put words in God's
mouth. I mean, we should never ascribe natural disasters or
anything else, to God. We are in no way, shape, or form should
a human being, play God.

I now ask you all: Is this for real?

Incidentally, there was also the recent incident in which George questioned a reporter, Peter Wallsten of The Los Angeles Times, why he was wearing a pair of sunglasses during a Rose Garden press conference; to be advised later on that the reporter is legally blind due to some rare genetic disease. This is a fact that George didn't know, or forgot, about one of the regular White House corespondents covering him for one of America's major newspapers.

If anything, it makes me wonder if George also experimented with Barrett's drug of choice during his party-hardy days.

posted by Señor Enrique at 9:47 AM

URGENT!
Even as the administration exploited this Official Story (or "Official Conspiracy Theory") as the pretext to launch new wars long in the making, independent researchers began to accumulate a vast body of evidence suggesting a different narrative for 9/11: that of the Inside Job.
The 9/11 events and the anomalies in the official story raised Unanswered Questions about:
- the unprecedented failure of the US air defense system on the morning of the attacks;
- the AWOL military chain of command during the actual attacks, including the inexplicable behavior of the presidential entourage;
- the seeming impossibility of official claims with regard to Flight 77;
- the evidence that Flight 93 was shot down;
- contradictions and dubious evidence in the official claims about the alleged hijackers and masterminds, and doubts about their real identities;
- signs that the alleged hijackers enjoyed high-level protection against discovery by honest investigators;
- evidence that the alleged hijackers were financed by states allied with US intelligence;
- suspicious and massive international financial trades suggesting foreknowledge of the attacks;
- widespread signs of official foreknowledge and, in fact, advance preparation for the 9/11 attack scenario;
- the long-running links between Islamist fundamentalist terror cells and US covert operations, dating back to CIA support for the anti-Soviet mujahedeen and Osama Bin Ladin himself;
- the demolition-like collapse of the Twin Towers and of a third skyscraper, WTC 7;
- and questions concerning who could have logically expected to derive benefit in the aftermath of a massive attack on the United States.
The suspicions received further confirmation a few weeks after September 11th, with the arrival of anthrax letters targeted only at opposition politicians and media figures, and timed to coincide with the introduction of the USA PATRIOT Act.
Google: 9/11 inside job

I meant for this to be a light-hearted post to end the week, Anonymous, and you can imagine my surprise to read about your comment about 9/11 as an inside job.

I am one of those who was spiritually (mind, body and spirit)devastated by this event. And like many New Yorkers, tried to find immediate closure to it. I also suspect that like myself, most New Yorkers felt like war survivors after this attack.

I must also admit that this is the first I heard of such speculations/discussions because for four years after 9/11, I took a sabbatical from using computers and logging online. It was only last September that I once again picked up where I left off (and with my luck, got this piece of lemon laptop).

Notwithstanding, I thank you for your visit and comment, Anonymous. As they say, "there's a reason for everything," and perhaps, now is the time I read/learn about this subject.

Dubya as president had been credited of inventing two new words :

It's quite clear that President Bush is overly-simplistic in his language, and I have great suspicion, in also the way he processed his thoughts. Now, in this times where grave global happenstance often ignite and where America is seemingly involved everytime, this situation becomes a very dangerous idea. Bush looks like that fictional President who could always push that red button to ignite a global nuclear war, like Krushnev and Nixon was before. Remember that nasty cold war era where the former Russian president was banging his shoes on a table, as seen in the public view?

About these snippets; I couldn't forget most how Bush dscribe himself as like this; "America is at war. There is a war going on. I am a war president." And he said that while he was horsing around in his ranch and as if he was too proud of that label---war president.

funny and very disappointing at the same time. how can America vote for someone who can't even express himself well in his native tounge?

I couldn't help but laugh (more of a nervous reaction, really) while reading your comment, Major Tom. There is a lot of truth to what you said. It's truly scary to think that some of these "buttons" are within reach of people with immense power but with somewhat questionable disposition.

His first term in office was basically decided by the Supreme Court, Jairam. As for his second, I really have no idea. You're right -- any head of state should at least have the skills to communicate.

"funny and very disappointing at the same time. how can America vote for someone who can't even express himself well in his native tounge?"

You like glib, you get Clinton. He was my governor for many years and I learned a lot about the American electorate...that they are easy to bamboozle with pretty words. Want someone "slick" as your president, vote for a car salesman. GWB is STILL my man. I wish he could turn a phrase like Tony Blair too, but I'm glad to have him as my president. We share the same beliefs and I agree with most of his policies, his weak response to border security being my primary problem with him.

Actually (although I hate to admit it), the last quote about Nato and Europe is a misquote. I did some maintenance last month after looking at http://www.snopes.com/quotes/candidate.asp and removed four misqoutes (from Dan Quayle) from the 500+ in the ChimpObase. Apologies. All the other frighteningly stupid quotes are his.

PhilippinePhil, please stick to Philippine politics. W's inability to speak along with general deficits in diplomacy (what's that?) and other leadership skills leaves a lot to be desired. Let me appeal to the evangelic Christian in you (why else would you STILL be supporting our worst president ever?). Haven't you heard that "faith without works is dead?" I think Jesus also may have mentioned that we should "judge them by their works," or something along those lines. I suppose you would point to W's handling of Iraq, Katrina, 9-11 (My Pet Goat anyone?), illegal spying on Americans, Saudi port contracts, or Halliburton contracts, as proof of his greatness?

Just what would it take to shake your faith in W's holy infallibility?

Well, let's all rejoice that Dan Quayle is not George W's VP! Hahaha!

Many thanks for stopping by Ryan! Everytime I log on to my Google page, your module is the very first read I look for. I just hope that you receive substantial compensation from Google for your creation, and most importantly for making many people laugh each day!