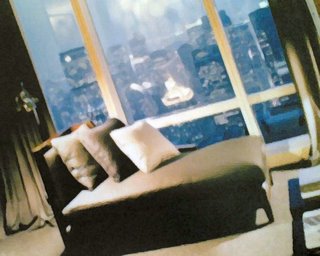 A year ago, I would have shied away from participating in a meme chain, because I didn’t know other bloggers well enough to sustain its thread. Tet of Penovate tagged me once; with great embarrassment, I declined citing this reason. However, now I know some fellow bloggers so, when Jairam tagged me the other day, I gladly obliged. It was something fun to do on this rainy day.

With great surprise, Major Tom also tagged me but his was of a completely different theme, Six Weird Things About Myself. Although I accepted it with enthusiasm, it just made me wish that I were just as amusingly weird these days as in the past. As you will see, today I'm merely boringly weird.

For example, in New York, when I was in my early 20s, whenever bored and stuck in the apartment due to a snow storm, I would do weird stuff like call the neighborhood Chinese restaurant, not to have some food delivered, but to ask if I had called the Suicide Prevention Hotline. I stopped doing it when Mr. Sam the manager began to recognize my voice. Another was whenever a girlfriend began to leave a more than usual amount of change of clothing in my apartment, I would suddenly break up with her. There was also the time I never allowed my gay cousin and his friends to hang out in my apartment without my being there, because they tend to rearrange my furniture, as well as immaculately clean up the entire place — for fun. Not sure in this case, though, if I were the weird one, or my cousin and his friends were. Oh, well...those were the days.

Moving on forward, here are the six weird things about myself these days:

1. Since 9/11, I am petrified of high-rise apartment living.

2. Overwhelmed by the sight of so much food at buffets, I tend to just eat the desserts.

3. In foreign places, I’d rather meet and talk to local residents than go sightseeing.

4. I subscribe to the idea that we are spirits first, human beings second.

5. To this day, I will eat cold leftover pizza for breakfast.

6. Whenever I call a local customer service and speak Tagalog, but the rep would keep talking back to me in English to impress me or something, I’d switch to English but of the Ebonics style as learned from my uptown brothers in New York. Sho’ nuff she be jivin’ back in Tagalog in no time.


I am tagging the following bloggers with the hope that they, too, will reveal some of their weirdness:


Hey guys, for the rules of the game, please click on Cogito Ergo Sam.

posted by Señor Enrique at 6:08 AM

uhmmn I think I've done this before. I was asked to cite 5 weirdest thing about me and i wrote it in tagalog. Hmmnn because it's your first time to tag a blog friend and it seems like you had fun doin this meme, I'll do it (again....wink) try ko mag-ingles this time lol!!

Thanks for the tag. I'll see if I can come up with 6 weird things about boring ol' me. :)

señor, i think i answered this meme before. thanks for tagging me again and see my weirdness. :)

This is refreshing and so revealing; a good further insight into you very interesting persona eric. The "spirit first/human second" weirdness is so interesting that I'd thought it be so nice for further elaboration...

Thanks, Irene, Jeff, and Tet! Looking forward to read yours :)


Ok, Major Tom, I will compose an entry about that subject matter.

aw, you're the very first blogger to tag me. I'm so greatful. Many many thanks! :D

Wow! And all along, Jhay, I was debating whether or not to tag you because you have so much school work to do, but I'm glad I did :)

My pleasure ... and can't wait to find out about your weirdness :)

hmmm...I will only eat leftovers if reheated w/ microwave for 2 minutes!


Acquired the taste for leftover pizza right off the fridge while in NYC, Jairam. I still had problems with waking up early enough for anything in those days. But usually for breakfasts, toasted buttered bagel or bialy would do it for me, and of course, Eggs Benedict for Sunday brunches :)