BONIFACIO AND THE CRY OF BALINTAWAK 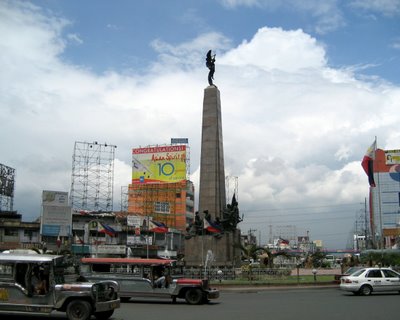 It has been said that we Filipinos have no sense of history. However, according to Ambeth Ocampo, it isn’t so much as indifference or amnesia, but rather our uncertainty as to what or whom to believe. Thus, the easy way out is to simply ignore the past.

Take for instance Andres Bonifacio); how much do we really know about him, as well as his group, KKK (Kataastaasan Kagalanggalangang na Katipunan ng mga Anak ng Bayan)?

To avoid an exhausting historical treatise, Ocampo suggested that we simply look at the world of local art and study how Bonifacio is represented by Filipino artists in the last eighty years in their drawings, paintings, music, and sculpture. He argued that the stereotyped image of Bonifacio as represented in their works goes against historical documentation. Hence, we have two Bonifacios in our national consciousness — one mythical, the other real — and that the myth has become more popular than reality. And therein lies our problem.

As an example, Ocampo pointed out when a sculptor submitted studies for a proposed Bonifacio monument to the National Historical Institute. From his awkward drawings revealed the popular Bonifacio stereotype: one wearing an open camisa de chino to display a muscled chest and pants rolled up to reveal bare feet. On his left hand waved the Katipunan flag, while his right raised a menacing bolo. To highlight this difficult pose, the artist gave Bonifacio fiery eyes and a silent but suggested rebel yell.

To the masses, there is nothing wrong with this image of Bonifacio. It can be seen in full color in the Carlos V. Francisco mural at the Manila City Hall, or in the various cement versions in schoolyards and municipal plazas all over the archipelago. Everything seemingly comes from the same mould or idea.

Ocampo traced the origin of this image to a drawing by Jorge Pineda reproduced on the cover of Renacimiento Filipino of July 14, 1911. From this drawing was born the monument by the sculptor Ramon Martinez, which was unveiled on September 3, 1911, in Balintawak (it has since been transferred and now stands in front of Vinzon Hall in U.P. Diliman).

Thus, that has been how most remembered Bonifacio until it was challenged by the late National Artist for Sculpture Guillermo Tolentino.

After painstaking research and interviews with people who had actually known Bonifacio, Tolentino created a masterpiece in bronze in Caloocan that has become a landmark now known as “Monumento.”

In this monument, as Ocampo illustrated, the artist represented a different image of Bonifacio: one in a closed barong tagalog, with a handkerchief tied on his neck, and wearing shoes! He stands calm but defiant with a bolo in one hand and a gun on the other. Behind him are Emilio Jacinto and a standard bearer with the Katipunan flag.

When the protests poured in, Tolentino countered his critics with his research. The likeness was based not only on a photograph of Bonifacio, but on the bone structure of his sister Espiridiona as well. Interviews with surviving members of the Katipunan gave an idea of his attire and revealed that, contrary to common belief, Bonifacio favored his gun over his bolo in battles. Tolentino even consulted espiritistas (psychics) to discern the true likeness and character of Bonifacio.

Ocampo also cited Bonifacio’s likeness to be elusive, for there is only one faded studio photograph of him in existence as compared to Jose Rizal’s numerous pictures. The irony of it all is that despite the common image of Bonifacio as the barefoot Great Plebian in his camisa de chino and rolled up pants, our sole photograph of him shows him wearing, of all things, a coat!

Aside from Bonifacio’s image, there was also the confusion as to the authenticity of the Grito de Balintawak tradition. Since the turn of the century, it has been widely believed that the first cry of the revolution took place in Balintawak, Caloocan. Then along came Teodoro Agoncillo, our nationalist historian, who gave the exact date for the cry as August 23, 1896, and the exact place to be Pugadlawin, not Balintawak. Despite these becoming textbook facts, according to Ocampo, the Balintawak tradition continues to thrive. And that even Nick Joaquin wrote in support of Balintawak.

This controversy remains unresolved except in our textbooks, but as Ocampo pointed out, depending on the book one should read, there were five dates for the Cry — August 20, 23, 24, 25, and 26 — and five different venues: Balintawak, Pugadlawin, Kangkong, Bahay Toro, and Pasong Tamo. Ocampo, to this day, remains confused and stumped himself.

I guess I won't add to the confusion that Quiapo is where it all started. :) I don't have any evidence to support my claims but I have 4 dwarves (Inee, Meany, Maynee and Moe) who told me so. Does that count ?

I was an avid reader of Ambeth Ocampo's history column in the National daily Inquirer back when i was still i nthe Philippines. I love history as much as mythology and Ambeth's accounts was always a joy to read.

Still shooting in auto mode; no time yet to learn its many features.

I picked up this book, Rey, when I stopped by to check out our National Museum near Luneta.

This entry was based on the two articles in the beginning of his book, which were originally published by Philippine Daily Inquirer.

I think this is not an exception.

In heroic art the diminutive Napoleon was depicted as taller; Hitler was shown as being physically stronger than nature had originally intended.

A hero is one who rises above the ordinary and must therefore appear to be extraordinary. Hence age-old and contemporary visual lexicons of heroism are essentially the same the world over, barring fashionable styles that denote specific periods. The primary method is to use an exaggerated representational style, a form of ‘realism’ that romanticises and even beatifies those depicted. After the warts and blemishes have been removed and the muscles have been fleshed out, what remains is a heroic shell.

You can find a very interesting article about designing heroes at
http://www.eyemagazine.com/feature.php?id=62&fid=270

That's fascinating, Sidney! Actually Carlos said the same of the huge oil painting of Legazpi the Spanish conquistador over in Intramuros -- that it was an "idealized image" of him.

Thanks for the URL, I'll check it out now.

Thanks for this info Eric. I've always accepted the image of Bonifacio at the Monumento as real. I didn't know that there was a controversy. Very interesting. The Monumento image suits him though.

That's interesting, what Sidney said. I guess then it's like what they do when they touch up pictures of celebrities, who are considered idols by many, in magazines. The blemishes are removed, boobs are somehow enhanced, some are made to look thinner, etc.

i was privileged to know ambeth in ateneo. we were classmates in chemistry. even then, he regaled us with his theory that rizal is the first filipino metrosexual, bordering on gay. . .

beneath ambeth's dignified barong and vintage accessories is a funny and witty persona, always giggling.

his controversial views are always refreshing. i'm glad he got out of the monastery.

I didn't know either that there was some sort of controversy involved in his image at Monumento, Toe. All along thought it was simply another depiction -- but still a heroic pose, nonetheless.

Yes, you're right, Niceheart; as called in the publishing arena -- "airbrushed." There was only one celebrity who was quoted as never wanting any of her photographs to be airbrushed -- Jamie Lee Curtis. She claimed that she was astounded one time when she hardly recognized a picture of herself in the cover of a magazine.

Waa! You've made my composing the answers to books meme even more difficult. I have a rare book about Bonifacio which shatters many misconceptions and misimpressions about him. I only remembered it now becaus of this post, arggh!

Now I have to rethink the entire meme again...

anyways, nice post. I'm actually writing a similar one in the coming days...

What is this rare book, Jhay???

Looking forward to your book meme and Bonifackio posts!

senor: this is very late, but i suggest you read "inventing a hero" by glenn may, which ambeth also endorses. that goes beyond the physical =)

minotte: you should get in touch with ambeth. i don't think he's actually given up on the monastery altogether...

Anyway, I know this book must be very good, especially when recommended by you so, I'll place a special order today.