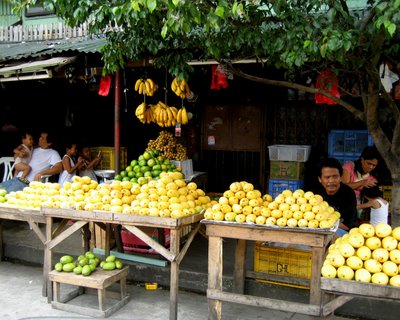 The traffic was unexpectedly heavy last Saturday morning on my way to get my laptop fixed; a virus had invaded it, corrupting the operating system. It was bumper to bumper on Calavite Street over at Blumentritt, but instead of getting bummed out about it, I just sang along with the Beatle tunes playing on the car’s stereo.

And as I belted out "Hey Jude" and turned my gaze to my right, I noticed these tables of ripe mangoes, lanzones, and dalandan; and hanging from the roof are some bananas. I immediately rolled down the passenger side window, snapped a shot, and went back to singing.

However, much to my delight, as I reviewed the pictures I had taken, I just now realized that this particular shot (click to enlarge) is teeming with family life.

Check out the proud father holding his baby while the two kids by his side are giggling over something that one of them is holding. And the man wearing a dark shirt seems to be figuring out who his buena mano (first customer of the day) is going to be as the woman behind him is busily picking out the lice from her daughter’s hair.

I have taken quite a few candid shots, but this one somehow just touches my heart. A simple family scene it may be, but the fruits on the foreground and the kids on the backdrop seem to suggest a bountiful life.

posted by Señor Enrique at 3:56 PM

The man in black looks pensive. This picture depicts stories in each character as you've mentioned.

Wow, neatly arranged fruits. I miss dalandan, they have a local version here, though not as good as what we have. Sometimes, we have Phil mangoes here.

Indeed, a picture worth a thousand words.

they sure have their own problems as well, but seeing the picture makes me dream of a simple life like that. less complicated, me thinks.... miss ko na mangga!

You forgot the lanzones, Ipanema. Do you have them over there as import?

Doesn't the French government allow import of mangoes, Analyze? Not even from Mexico?

I thought they have "duck la mangga" by now at some of your fine restaurants over there ... hehehe.

Great observation and great shot indeed if that's how you will look at it.

We also get mangoes here, the kind that we call indian mango there. The closest to dalandan that we get is the ones that are called Mandarin oranges. No lanzones. I miss lanzones.

haha...i was too busy looking at the mangoes. I wonder where I could buy one at this time of night? :-) haha... (btw, it's 12 midnight while I'm writing this comment.)

We have lanzones here. Mostly coming from Thailand. Not as good as what we have though.

lol...if you still have your bicol express, have another round. :)

No lanzones in NYC, either, Niceheart. Remember when you just have to wipe your sticky fingers over your hair after eating lanzones? Forgot the redeeming value of doing such thing :)


That was what originally happened to me, Ladybug -- focused on the mangoes more than anything when I took this shot. Midnight, huh ... Divisoria will be agrind with fresh deliveries in two hours or so ... hehehe.


I tasted the tamarind (sampaloc) from Thailand, Ipanema -- huge but bland :(

Yup, slowly reinstalling the other applications. What a pain! :(

I miss the Philippine fruits! I haven't found lanzones here in the U.S. There's lots of longgan though, which look like lanzones. Never tried them, though.

No chico or santol, either.

This looks like a scene from a Manansala piece, although an urban one. If I were a good painter, this is just the kind of situation that I want to capture.

I love mangoes so well that I am glad that nowadays, they are available almost whole year round, unlike in the past when they just have the sweet ones available when its in season. This might be the result of great advancement in agriculture technology...

You see a guy worrying about 'buena mano'.

I see a guy's daily struggle for 'buena mano'. Somehow in malaysia, people are not as financially stressed as their pinoy counterparts.

Btw, our mangoes are the BEST.

nice pic. yup, miss those mangoes. one of the benefits of being in the philippines, i would say. we get philippine mangoes here, too, but it's all dried up by the time it gets here. not only that, they're expensive here.

Imports of lanzones, we call them "buahan" in Mindanao, have been tried in the West Coast, as far inland as Sacramento.

But because of the difficulty in shipping fresh lanzones over great distances, it is sold refrigerated and at times quite frozen.

And they come out with darkened skin and are not really popular.

Eric: Yes, thai tamarind is huge but tasteless. even their mangoes and durian. so far malaysia's durian variety is akin to ours.

Aurea: Try longgan it's sweeet,if I'm not mistaken that's lychee. We have it here. :)

Major Tom: It really is a good painting material.

Santol is in season now, Aurea. But let me tell you, I haven't seen such huge ones! When I was a kid they were not that much bigger than a chico.

Unpeeled santol rolled in salt are sold by street vendors all over the university belt area of Manila.

Correct me if I were wrong, Major Tom, but if my memory serves me right, when I was a kid mangoes used to be in season during May and December only. However, nowadays, mangoes are available year round.

And since my father was from Zambales, I'd say Zambales mangoes are the best, S.A.! hehehe.

Hmmmm...you may have a point there with this guy.

in NYC, Wil, we used to only get mangoes from either Mexico or India. And they were expensive, too -- about $2.00 a piece. Regardless, my brother and I would still buy and feast on them ... hehehe

Average local price is 60 pesos a kilo (about 4 pieces).

Wow, didn't know lanzones have made it to the USA, Amadeo.

Perhaps, flying them over instead of refrigerated container aboard ships is the best way to export them abroad.

I can imagine the darkened skin turning off most potential customers.

Durian can be tasty but the awful scent of the fruit itself is a turn-off, Ipanema. They have lots of them in NYC's Chinatown.

Canned lychee I'd sometimes have for dessert.

We should commission Rey to do a watercolor version of this photo.

Can you propose that to him Eric? I don't mind paying. If it's free, it's more welcome. :)


Actually i've been meaning to ask him to do one for me, haven't got the courage to say so...lol

But wouldn't you rather feel like the Pope and paying handsomely for a personally-commissioned work of art by a great artist? :)

lol Eric. I'll auction it afterwards to get my money back.


We should all have a copy of that 'fruity life' painting. :)

The mangoes are but a mask of the real deal you have captured in this picture eric-- the family in the left corner.
The gloomy face of the baby and the reassuring one of the father while the smiles postered on the two boys' faces expresses simple joys in life.

Aha! But some artists might revile you for taking interest in their works simply for the possible economic gains, Ipanema :(

I have a suggestion: You can make it look like a painting by just using Photoshop, and then have a poster-sized version printed to be framed... lol!

Actually, Rey, I considered this an example of chance process -- a gift from God!

I really didn't notice the human drama behind these tables of mangoes until I was reviewing the shots at home.

No need Eric, my youngest told me he's doing it BUT i have to wait when he feels like it. :)

Very nice street shot! (Wow! I am getting serious competition from you ! )

They tried to introduce Filipino mangoes in Belgium but I don't think it was a success. Most Belgians don't know mangoes and it was very expensive. I not sure but I think it was around 2 Euro ( = 130 pesos/a piece ! )

Worry not, my friend Sidney, because tsamba lang ito (lucky shot only) ... lol!

That's about the same price of it in NYC, but like I said, we bought them only because we missed it!

But as a smoothie drink mixed with banana, it's simply delicious!

Oh ok, Ipanema. Please take a photo of his finished work and share with us, ok?

Sure. I'm not promising when as exams are coming and notice the conditional sentence there? "When he feels like it." :)

I've definitely have to agree with you that it is a beautiful picture. It touches my heart too!

What are lanzones and dalandan though? I mean what kind of fruit are they?

Check out this URL, Kyels, for better pictures of lanzones and a brief description.

Dalandan is a citrus fruit, our local orange.

Check out this site for more about dalandan and other Philippine fuits:

What a lovely photo! You really have a good eye for picture-perfect moments. :)

I especially love this shot because it highlights my most favorite fruit in the world - the Philippine mango (which I had just recently posted about as part of my contribution to 50 things to eat before you die over at Traveler's Lunchbox's site).

I'm on my way over to your site to check out your entry.