UPDATE: WHERE AVENUE THEATER ONCE STOOD

This is the newly-erected structure that now occupies the front part of the property where the Avenue Theater once was. This single-story structure features retail shops offering cellphone accessory merchandise. And right behind it is a vast parking lot.

The Avenue building -- designed by Juan Nakpil and built during the 1930s -- was the tallest in the area and boasted a movie theater, hotel, retail shops and small offices. It was among the few buildings on Avenida Rizal that survived the American bombardment during the Battle of Manila. 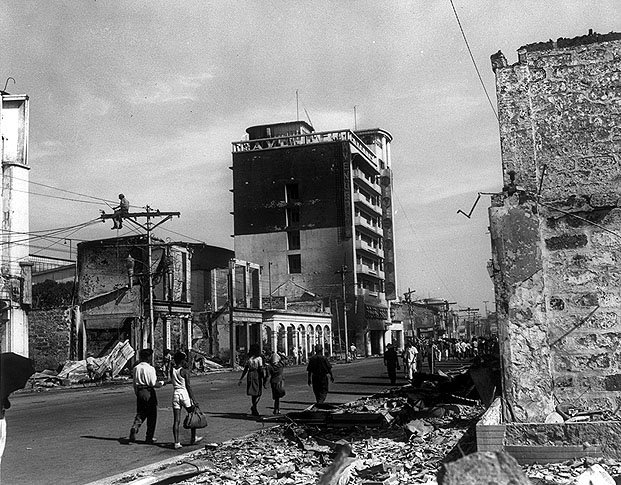 posted by Señor Enrique at 7:33 PM

they could not preserved the avenue theatre? well, maybe we need more parking space.

Instead of conserving the old Avenue building, Photo Cache, the owners opted to demolish it so as not to have to supposedly pay exorbitant property taxes. By having a mere parking lot, its tax assessment would then be much lower, I guess.

Another one of those important historical landmarks lost to urban modernization . This looks like a trend that cannot be reversed any longer, when enterpreneurs are willing go all the way to get much neeed real estate :(

Sadly, you may be right, BW. Because for most with such investment exposure, it's maximizing the profits more so than conserving culture and heritage :(

It's sad that our government does not give some sort of initiative to preserve old and historical structures. I don't really know if it's done in other countries but I would like to see a cityscape similar to say, Prague or even some quaint town in Poland. Yun bang preserved yung mga buildings nila. Sayang eh.

The previous administration wasn't too keen on heritage preservation, Scrooch, but with Mayor Lim on the helm, we may have a more symphathetic mayor, hence save more landmark structures from getting demolished.

you'll be surprised at how much a parking lot earns per square meter vs. the development costs.

losing an iconic structure was bad enough. having it replaced by a low value building is worse.

and this is where some good urban planning regs should have come into play. if the zoning code had a minimum height requirement - say 4 to 5 stories - and mixed use (2 floors commercial, three floors residential) - the replacement building would have added much more to the street and the city

the regs would also have deterred cheap investment.

I can imagine it to be quite substantial, Urbano. Parking spaces in Manhattan are commanding staggering prices that almost equal the cost of rental fee for a studio apartment across the bridge.

Apparently, there is no zoning laws in most of Manila; hence developers can build whatever they desire.

That entire enclave you mentioned, Rowena -- Santa Cruz-Binondo area or downtown -- was the premier place to go to for shopping, dining and entertainment. However, since the exodus of the financial community to Makati, eventually everything else followed due to certain reasons. What finally brought it down was the emergence of malls in the Metro Manila areas.

Sad...as a young boy, I enjoyed many, many good movies at Avenue Theatre. I guess nothing is permanent except change.