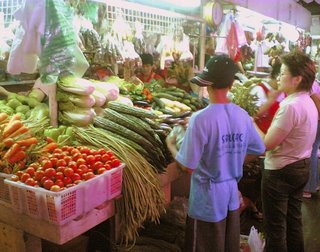 When I was a kid, every now and then on a Saturday, my father would wake me up very early to take me along with him to Blumentritt public market. It was just the two of us.

Immediately upon arriving, before buying a single item, we would first head on over to the prepared food stalls for a palabok and puto breakfast. But getting to our favorite food counter would sometimes require the skills one would use when playing patintero. You see, we had to pass through a stretch of other food merchants whose help would grab people -- their way of coaxing customers to check out what they had to offer. It was annoying but part of the whole experience.

My father was a good shopper and wasn’t embarrassed to haggle every now and then. But with the vendors we bought from regularly, I noticed he never would bargain with. I guess, since he had gotten to know them, he was sort of embarrassed to ask for any cut in price. Perhaps, this is the reason why an aunt avoided getting too familiar with the public market vendors; afraid she might end up paying more at times.

The meat and seafood section at Blumentritt, as I remember it back then was always wet and sometimes muddy as well. My father would usually leave me near the entrance to it where a classmate (at Bonifacio Elementary School) and his mother sold calamansi on the street. There were times my father took a long time to do all his meat and fish purchases that he would often return to find me and my friend aggressively beckoning people to buy calamansi from us — without the grabbing part, of course, as done over at the food stalls.

As a joke, my father would say, "Since you looked just like a seasoned pro hawking calamansi out there perhaps, I should get you a spot next to your friend's so you could peddle onion and garlic on weekends to earn your keep." It would amuse him furthermore whenever I would ask in return, "But who would go with you to the movies after work today and to the racetrack tomorrow afternoon?"

The foodstuff we bought on those Saturday mornings were usually for the entire weekend so, by the time we were done, we’d end up with quite a handful to bring back with us. But as a special treat, my father always hired a kalesa to bring us home, which I absolutely enjoyed. I loved western movies and TV shows at that time and the kalesa was the closest to horseback riding that I could experience.

Nowadays, I would sometimes do the marketing myself over at Blumentritt and much like my father, get too embarrased to bargain with vendors I've gotten to know. But finding a kalesa is not as easy as back in those days. This is also a scene so important to me...That early morning feeling and the smell of palengke as you enter it. My grandfather used to bring me also and what I am so reminded of the most is the smell of strong brewed/native coffee brimming over a section where we can also buy very fruity halo-halo. I bet, the market scene, with all the noise and cacophony of people, is a microcosm of a flourishing society, where everything seems to be happening all the time.

I used to hate going with my mother to the wet market... Because she's such a good bargainer and will relentlessly ask for lower prices from vendors, even her "suki". I'm the one who was embarassed, I guess. And I don't know the bloody hell why. Same goes with my wife nowadays. So I just stay at home. :)

What a very interesting observation, Major Tom. Perhaps, that may be the essence in which Mar Roxas' campaign strategists exploited -- the palengke as a microcosm of our society. And the Mr. Palengke persona gave the masses the illusion of instant affinity with him.

BTW, yes ... the scent of fresh brewed coffee, including that of the pandesal were significant elements of the early morning palengke landscape.

This entry was inspired by a recent discussion with friends, Rey. Much like you, two of them were greatly embarrassed by their moms and lolas for their relentless haggling with vendors; most of whom would give in out of exasperation not because of any desire to give them a price break.

Also, due to this series of bargaining, their marketing would usually take more time than necessary, which only added to my friends' frustrations :)

I miss riding the kalesa...in Angeles City (our place) we have lots pa.

I still get to ride a kalesa, Jairam, even if only once in a while.

When I'm in Quiapo and would like to go to Ongpin. I'd usually wait to find a kalesa to take me over there. The same when I find myself in Sta. Cruz and wanted to go to Divisoria -- kalesa would be it for me! But they're harder to find these days.

Oh, I hated going to the wet market. Maputik at mabaho.

We all have different fond memories of our childhood, ano? It's amazing how some memories stay more vivid than the others.

What I find even more amazing, Niceheart, is my sister only a year older who has a sharper memory.

Like the Great Dane dogs we had -- Jack and Jill -- who were often caught by the city pound, and the battery-operated robot I received as a gift but extremely petrified of. She remembers them well but I don't. My mom fully backs her up.

When i turned 13 my mother started training me to go to Pritil and Divisoria to shop not only for groceries but also items for her dressmaking shop. I used to walk to Pritil to save my fare so i could by gulaman , lugaw or whatever while i was there. I would also bargain quite a bit so that i can buy more food. I would of course catch the Jeep to go home.

I really like your blog site as it brings some fond memories of back home..

Thank you for stopping by, Seesmith.

That was some training you had and at such a young age. I like what you said about bargaining and then treating yourself to some merienda with the money you saved. Talk about polishing one's business acumen :)

And many thanks for your kind remark! I will post more nostalgic entries in the future.