CLOSE ENCOUNTER OF THE FIRST KIND 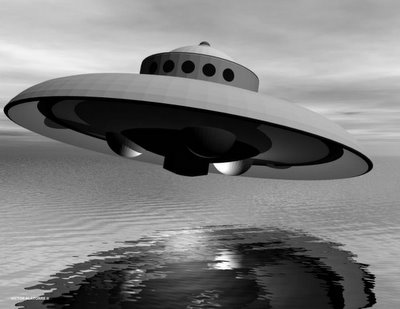 MSNBC reports that former U.S. President Jimmy Carter is once again discussing his UFO sighting experience, this time with GQ magazine. It supposedly occurred in Leary, Georgia in October of 1969 as he was preparing to speak at a Lions Club meeting. Mr. Carter was at that time running as governor. He recalled that it was a bright light that got "closer and closer to us," but then "changed color to blue," then to red, then back to white, and then "receded into the distance." The former president, however, does not believe the unidentified aircraft came from Mars.

Cecil Adams of The Straight Dope casts doubts on Mr. Carter’s creditability by citing a report by Robert Sheaffer, a volunteer researcher for the Committee for the Scientific Investigation of Claims of the Paranormal. Mr. Scheaffer reported in an issue of Zetetic magazine that what Mr. Carter actually saw on that fateful October evening was not a flying saucer, but the planet Venus, a notorious trickster in these matters.

Whether what Mr. Carter saw was indeed a UFO or not, what most Americans were irked about was he never made good on his promise—while campaigning as a presidential candidate—to make the U.S. Air Force’s UFO dossiers more transparent to the American public once elected president. However, when he did become president, it suddenly became a dead issue. And now, more than a couple of decades later, he’s back with his UFO sighting stories.

With billions of galaxies that exist in our universe, I tend to believe the possibility of other far more advanced extraterrestrial civilization out there. I wouldn’t be so audacious as to claim that humankind is so special as to be the only existing living intelligence in our entire immense universe. I’m not basing such belief on my once fascination with the Jetsons or Star Trek, but rather on numerous credible sighting reports such as the one reported by CBS Morning News about ten years ago.

CBS received a copy of a tape of a radio communication between the air traffic controller and the captain of a Japan Air Lines flight that had only minutes ago taken off from Anchorage, Alaska en route to Tokyo. In this tape aired by CBS, the pilot was inquiring about a huge aircraft hovering directly above them, but the tower personnel insisted the radar was not indicating any other aircraft in their vicinity.

The captain then radioed back that the mysterious aircraft was now cruising right alongside them, and described it as about the size of a naval aircraft carrier. After about another couple of more minutes, the captain reported it had suddenly flew sideways disappearing into the horizon in a blink of an eye. The whole incident was witnessed and later on officially reported by the entire flight crew.

Interestingly enough, other major airlines, especially the British Airways, prohibit their flight personnel from making public any unusual UFO sightings they may encounter.

posted by Señor Enrique at 5:55 AM

i guess saying that you've seen a UFO doesn't necessarily mean that you're claiming you saw an extraterrestial aircraft or beings. UFO is just that --- Unidentified Flying Object, with the keyword being UNIDENTIFIED.