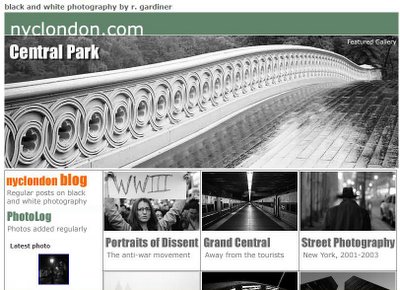 For those longing to see some pictures of New York City, here is an intensely awesome gallery of black and white photographs taken by R. Gardiner. He was born in Sydney and had moved to New York in 1999, but now lives in London.

As he had written on his blog entry, “With a million unique visits to this web site in 2005 (and many times more page views), I am more convinced than ever it is the ideal medium for photographers to exhibit to a wide audience. The web can not reproduce the beauty of a physical print of course.”

This photo site, nyclondon.com, is absolutely worth exploring!

posted by Señor Enrique at 6:32 PM

thanks for the site, i'll check it out to see any photos of new york's theater houses,

I love black and white photos, they look really classy!

Thank you for the link. Fantastic pictures & nice site.
A million unique visits... I can even not dream of this :-(