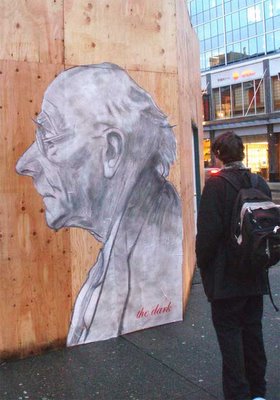 I like street art. Every summer, in Manhattan, you’ll see artists with color chalks sketching wonderful copies of masterpieces right on the pavement. The next day, you’d find scant traces of which; erased by the pedestrians having walked on them or washed away by the rain. Other street artists choose the temporary plywood walls that obscure construction sites as their preferred medium. That’s all it is — a temporary public exhibition done in good taste.

What I find disturbing are those spray-painted graffiti that assault the senses; done more to defile someone’s property or cry out a personal hate agenda. The New York subway system used to be severely affected by this dilemma. Currently, no train from the yard is allowed to run if it has been vandalized. New measures are always being developed to secure the train yards and discourage night time spray painters.

According to a New York Daily News report, arrests of graffiti artists in the city were up 90 percent. The success was credited to the NYPD’s anti-graffiti program. It handed out about 150 digital cameras to each precinct and other commands as a means to monitor vandalism and identify patterns. The NYPD has so far made 700 arrests and examples of their work have been stored in a database - so when their tags, or signatures, are found, they can be busted for the latest paint job.

Ironically, New York City has become the center of street art pioneered by Keith Haring and Jean-Michel Basquiat; former graffiti artists who were nurtured by the legendary Andy Warhol. Although still regarded by Mayor Bloomberg as the scourge of the city, some street artists have been gaining the attention of trendy downtown gallery curators, as well as the advertising industry.

The corporate America in which these street artists used to disdain is now supporting their work. The Tats Cru group from the Bronx uses advertising style of the 1950s to promote multinational soft drink and sports shoe manufacturers. However, they deny having sold out; referring to their lucrative commissions as a natural progression to another level.

There will be ongoing debates over the legitimacy of graffiti as an art form. Nonetheless, see more of it all over New York for years to come.

I am surprised that there isn't much graffiti to be seen on the walls of Manila. Do you have any explanation for this? (Paint to expensive?)

That painting in your picture is too good to be thrown away once the walls have to be torn down. Sayang.

I might have to agree with you on that one, Sidney; the prohibitive cost of spray paint deters our local wannabe graffiti artists.

However, another form of vandalism occurs in the city -- not so much artistic but more in thievery. Theft of copper from power cables and metal manhole covers are prime example.

Oh niceheart, you ought to see the masterpiece-like sketches on the pavement that some of these artists do; incredible!

The only time the police would approach them is if they had attracted too much attention with some pedestrians spilling over the street to walk around the gathered crowd. More of a traffic problem than anything.