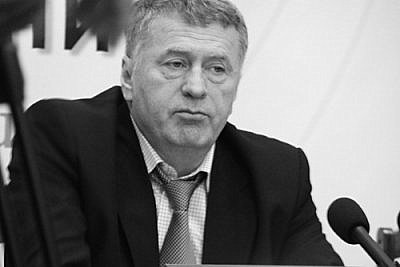 Vladimir Zhirinovsky, Russia's Liberal and Democratic Party leader, has always been up front with his in-your-face fascistic political agenda, which oftentimes borders on insanity. He has no qualms for glorifying Adolph Hitler and supporting the aggressive use of nuclear weaponry. He has also vigorously advocated Russia's invasion and "reacquisition" of Alaska. As a means to fight bird flu, instead of vaccines, he suggested supplying every Russian citizen with appropriate armament to blow away everything with feathers.

Most recently he has fixed his ire on the U.S. Secretary of State Condoleezza Rice. During an interview with Pravda, Zhirinovsky chastised Rice for calling on Russia to "act responsibly" in supplying natural gas to Ukraine; attributing, as he claimed it, the secretary of state’s "coarse anti-Russian statement" to her being "a single woman who has no children.

He went on with his tirade. "If she has no man by her side at her age, he will never appear. Condoleezza Rice needs a company of soldiers. She needs to be taken to barracks where she would be satisfied.”

Like a runaway train, Zhirinovsky ranted on. "Condoleezza Rice is a very cruel, offended woman who lacks men's attention. Such women are very rough. … They can be happy only when they are talked and written about everywhere: 'Oh, Condoleezza, what a remarkable woman, what a charming Afro-American lady! How well she can play the piano and speak Russian!'

"Complex-prone women are especially dangerous. They are like malicious mothers-in-law, women that evoke hatred and irritation with everyone. Everybody tries to part with such women as soon as possible. A mother-in-law is better than a single and childless political persona, though."

A State Department spokesman issued a statement to the press that Rice would not "dignify the article with a response."

Hi Senor! I have no sympathy for Condoleeza's Rightist Politics but I am outraged by the misogynistic comments of this Stalinist b*st*rd. Reminds me of the other misogynist in the other end of the political spectrum, Rush Limbaugh. He once said that feminism was invented so ugly women could find dates.

I guess both men are not different after all despite of their politics. Thank God we are not like either one of them eh?

I only agree with Vladimir on one point, and that is Condi needs to get laid so as to be less cranky.

Goodness, Rush Limbaugh. You brought me back down memory lane, TK, to the days when I used to have the radio tuned in to WABC at work. His show was sandwiched by Joy Behar's and Lynn Samuels' in the mornings. I remember this guy for his vicious anti-gay sentiments which made Queer Nation respond in kind. He reminds me of Norman Lear's character, Archy Bunker.

The two ladies I love for their wit and sensitivity.

There was another but older guy in the afternoons. I forgot his name. He was feistier, but just like Limbaugh, would twist the facts to advance the right's agenda. Both were nothing more than blabbering buffoons to me.

Yeah, she seems so uptight and robotic.

But on a more serious note, I wonder how the African-American community in general respond to her?