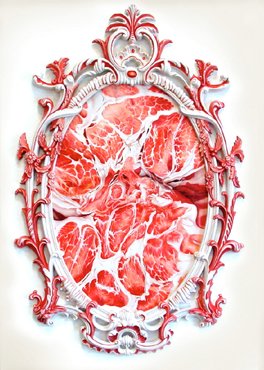 Slices of pork as art? Why not? Los Angeles artist Victoria Reynolds is quite candid to admit that meat has been her muse these past eight years. It’s her way of expressing raw sensuality?

In her interview with Noche Kandora of Lust Magazine, Ms. Reynolds revealed her purpose in using images of uncooked meat in her artwork. She claims, “Living in the flesh is great—though we might disparage it, thanks to the Biblical Paul, who was probably a gay male living in a drastically homophobic society. In Dutch Protestant paintings of the 15th and 16th centuries, meat often referred to ‘the weak flesh.’ In my paintings, the beauty of the flesh is shown, and the ornate frames emphasize the non-Puritanical content. People call the frames "over the top” or excessive. They’re often painted to match the meat. When viewing the paintings, some say they have a gag reflex while thinking at the same time they're beautiful.

Before she got involved with meat, her oil paintings were about “lots of deteriorating soft-serve ice cream cones. Messy, sticky. Things got more and more ornate—frothing and curdling banana splits, dark glistening cherries atop whipped cream. Cream and meat come from animals. The whipped cream looked like the lacy tripe paintings I do now. There's a type of tripe called Bible tripe—because of its wafer-thin sheets that fan out. Some might say that the televangelists spew forth Bible tripe.”

Your paintings are gorgeous. I saw your work at the Laguna show. You were the best.
Rebecca