A NEW YORKER BEGGING TO BE LOVED 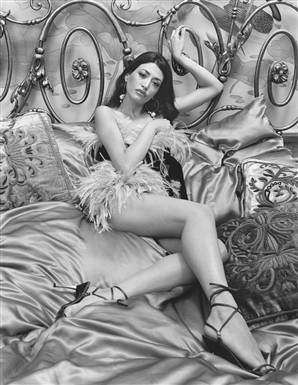 “I want to be accepted here, but I feel that everybody’s judging me and rejecting me. Come on, where’s the American spirit? Accept me. I want to be embraced, because my values are like yours. And I’m here. I’m not hiding,” cried Wafah Dufour, a California-born musician and law school graduate who lives in New York.

She is also Osama’s niece, daughter of his half brother, Yeslam. She adopted her mother’s maiden’s name after the 9/11 attacks were blamed on his uncle.

And who could blame the guys from not calling her despite of her exotic good looks? To do so might invite the Homeland boys to declare open season on one’s phone and Internet history records. Who needs that?

GQ Magazine will publish a photo spread of scantily-clad Wafah in its upcoming edition. This may be the beginning of her relationship with the press; hence the Bin Laden clan’s aspiring LaToya.

I don't blame her for changing her name at all. The dumb thing would have been to keep it. But now that she's flaunting herself so, I wonder if she hasn't made herself a target again.