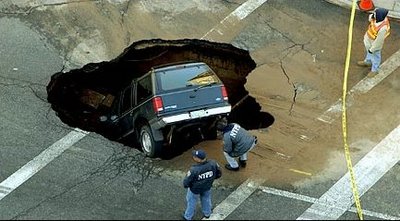 Imagine driving along the streets on a quiet early morning and then stopping on a red light. While whistling a happy tune waiting for the light to turn green, the very earth below suddenly drops out from under you.

That’s exactly what happened to Nancy Batista according to a New York Times report. At about 3:30 a.m. the other day when she was stopped at a traffic light in her Ford Explorer on Fourth Avenue in Brooklyn, headed south, as in toward the South Pole. A few seconds later, she was heading south as in toward the center of the earth.

What happened was, which has been an every-now-and-then-phenomenon in New York City, is that an ageing water main pipe exploded. In the process, it had scoured away the earth beneath the surface of the street, and Ms. Batista's Ford Explorer broke through the asphalt and fell in. The hole was 10 feet deep. But Ms. Batista was lucky: her S.U.V. landed on a gas main pipe about four feet down. Ms. Batista, 46, escaped with only bruises and cuts, doctors said.

The whole neighborhood around Fourth Avenue and 73rd Street, in Bay Ridge, was lucky as well. This incident did not precipitate the gas main to explode in flames; neither was there any gushing water to flood the neighborhood. Usually, a burst water main would be immediately followed by lost of power, or gas, or water service; restoration to normalcy would take several days.

Something similar to this happened here in Winnipeg last year. A vehicle sunk in a huge pothole. I can't remember now what exactly happened. Potholes are everywhere in the streets here after the snow melts.

You should always be prepared to die... you never know when it will happen...

THe gates of HADES UNLOCK!,
OMG. we must always be ready for a FALL!

I bet New York city should undertake a major redevelopment plan. I had a Canadian cousin who had toured New York years ago and when the first time he set foot in Manila, he had described Manila as dirty and "sort of like New York" (hope you won't take offense as a New Yorker), or parts of it. I hope it ain't true but I can see now some idea why he said those words.

Gosh - that's a pretty scary cavity. Looks like some earthquake had struck! If she wasn't on a sturdy Explorer she could have been hurt.

I'm a great fan of the Big Apple man. Sure the cabbies are rude but there's lots of things you can do in NY and if you love food - NYC is the place to be.

I never thought this kind of accident can happen in America. Scary.