They can appear unexpectedly on any part of the body as ugly, hideous and itchy reddish wheals that can make you look like a sci-fi B-movie ghoulish character—with a bad make-up job.

The size of which varies anywhere from that of a mosquito bite to a swollen mark on the skin about a couple of inches in diameter surrounded by redness. They would sometimes initially manifest as clusters on the neck and upper chest areas, but soon spread to the face, back, and throughout the rest of the body. As if these were not horrific enough, you also begin to experience teary eyes, increased saliva production and diarrhea—simultaneously. And you thought an overstaying, meddling mother-in-law was the worst intrusion in your otherwise pristine life.

Much to my dismay, for the first time in my life, I experienced an attack of these itchy monstrosities about three weeks ago. My right cheek and neck first appeared as if carpet-bombed with mosquito bites. By the following morning, my cheek was swollen and as red as a Macintosh apple. It was horrible!

This outbreak is commonly known as hives or exercise-induced anaphylaxis (EIA). It can be a sort of allergic reaction, which manifests itself through a spectrum of symptoms affecting the cardiovascular, respiratory, gastrointestinal, or other vital systems. Anyone can be affected — from young children to elderly folks — but physically active teenagers and adults are more often susceptible. According to emedicine.com, physical activities that can trigger episodes of EIA include walking, dancing, racquet sports, swimming, jogging, bicycling, skiing, basketball, and sprinting. Moreover, hot humid weather and cold weather can precipitate episodes in some patients.

What did it for me, I suspected, was the lunch I had before I went out to play badminton that afternoon — grilled milk fish and salad (chopped onions, tomatoes, green mango and bagoong). I said I suspected, because even the medical community is uncertain whenever pinpointing the definitive cause or allergen that induces an EIA outbreak. A sure-fire cure can be just as elusive. Usually, doctors will prescribe heroic doses of anti-histamines, steroid-based medications, drastic change of diet and what not. But these are more often trial and error affairs.

Determined to avoid steroid-based drugs (the prominent side effect of which is weight gain), I decided to go for home remedy cure and contacted my sister’s friend from Baguio — a so-called medicine woman. Much to my surprise, her method for this particular malady involved no esoteric cocktails of herbs and tree barks. She simply recommended a cold compress for the swelling and to replace my usual drinking water (for about a couple of weeks) with lightly salted lukewarm water. In addition, she had me take at least four cold showers each day — using Dr. Kaufman sulfur zinc oxide soap, which is available at all Mercury Drugstores.

Within a couple of days, the sores subsided and with the application of the locally-made sebo de macho, over the affected area, there were no leftover scars or reddish marks. I do, however, still experience some minor outbreaks on my back and upper arms, but they are all manageable now with this home remedy regimen. The current hot weather in Manila obviously exacerbates this unpleasant situation.

Nevertheless, throughout this hellish ordeal, I pursued my badminton and yoga exercises with as much enthusiasm as before. The last thing I wanted to do was to succumb to this outbreak and allow it to disrupt my regular activities.

Photo credit: aclaic
Note: Unable to attach photo at this time. Must be a Blogger malfunction. 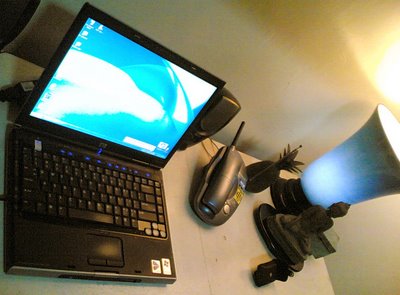 Had it not been for the standard one year warranty that came with it, I would have, in addition, spent at least another twenty five thousand pesos for each motherboard plus labor costs; indeed, quite an expensive prospect for owning an HP product.

Just before the Easter holiday—when the replacement motherboard was beginning to show some signs that it, too, was about to bid me adieu—someone from Hewlett-Packard’s management, Erick Icasas, called me after I had called its customer care department twice to express my growing dissatisfaction. His affable nature was certainly disarming, but his candidness was unsettling—that HP knew about the motherboard problem with its Pavilion dv1312 AP model. However, he assured me the issue was supposedly addressed accordingly last August of 2005. I purchased mine on September after persuaded by its enticing half-page advertisement on Philippine Inquirer’s August 29, 2005 issue.

I retorted rather matter-of-factly that Hewlett-Packard may have not have done such a diligent job in resolving the motherboard issue prior to going ahead with its seeming aggressive promotion of the HP Pavilion dv1312 AP by buying a half-page ad space on a national newspaper. A jaded, cynical cousin would later opine that this is common practice amongst multinational companies — to liquidate their inferior products by dumping them on the Philippine market.

Be that as it may, I was further troubled when Erick Icasas insisted that Hewlett-Packard does offer an optional three-year warranty on this product; however, I was told the contrary by the store I bought it from, Silicon Valley at SM Manila, on the day of my purchase — that there was no extended warranty being offered for this product.

Since there is an ongoing motherboard issue, I asked him that I be extended the courtesy by HP by allowing me to purchase the optional three-year warranty. This would indeed demonstrate the company’s sincere concern and appreciation for its customers. I was assured that he would discuss it with his superiors and would promptly advise me. I never received a call back from Eric Icasas; not even from the voice mail message I left for him the other day. I will try him again on Monday.

As it stands, after picking up my laptop from an HP-authorized service center last Thursday, I no longer wanted the three-year extended warranty as I had requested from Eric Icasas, but rather, either HP allowed me to upgrade to a higher model fitted with a workhorse motherboard and peripherals that HP laptops are known for (and I’ll gladly pay the difference), or allow me to return the laptop and refund my money entirely.

In the States, there is such a thing as a lemon law to protect consumers; I do not know if there is an existing similar local legislation, but I am surely about to find out. For the meantime, I will seek others who may have purchased this same HP laptop model and trade notes with them. I would also appreciate if readers could share their opinion on this matter or any unfair consumer experiences that they might have gone through, especially with a high-priced merchandise.

I will keep everyone posted about this ongoing dilemma I am experiencing with my HP Pavilion dv1312 AP laptop.