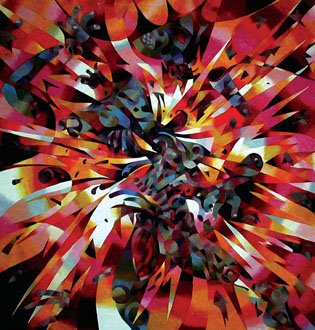 Out of courtesy, I'd usually first ask the artists and photographers for their permissions prior to posting their works on my site. However, in this case with Enrique (Eric) Tabuena — since he didn’t include his email address on his profile at Tabuena Art Central nor allow comments on his entries — I’m just going ahead with it because he has a solo exhibition coming up soon and I’d like you all to know about it.

His show, Woman is in the Details, features 35 artworks from his new collection of oil on canvas paintings. It will be held at Galerie Astra at LRI Business Plaza in Bel-Air 2, Makati from July 7 to July 21.

I first heard of, or should I say from Eric when he posted a comment on one of my blog entries a while back. I’ve become a regular visitor to his site ever since; always enchanted by his paintings. Last week, planning to feature one of his works, but not knowing that much about him, I googled E. Tabuena and came across Tata Botata’s blogsite entry about him.

Eric Tabuena happened to be the art director to whom Tata Botata, a graphic artist, once reported to. Tata was surprised to have discovered that his boss at the agency has a blogsite. He then went on to discuss Eric’s techniques with his artworks, as well as give him credit for having encouraged him to start his T-shirt designing business.

Having gone to a number of art exhibitions — which showcased some of our upcoming local artists — at SM Megamall’s Artwalk, as well as those over at Edsa Shangri-la Plaza mall, I must admit nothing has captured my imagination as much as Eric Tabuena’s artworks.

Two of my favorites are Sambulat (featured above) and Magic Flute. Both I find cerebral. Engaging.

forgive me, i am not knowledgeable about art and all its jargons, but that is indeed beautiful. it seems to explode right before your very eyes.

Neither am I that savvy with art-speak, Vina. But I know when I really like something -- I get lost in it.

Like you, I see a man's head blowing up into smithereens :)

Eric, would you be able to give me a link where I can find an image of the "Magic Flute"? Thanks.

Oops, sorry. I just checked out the site. Anduon pala. :)

No, tama ka, Niceheart. I should have put a link to Magic Flute.