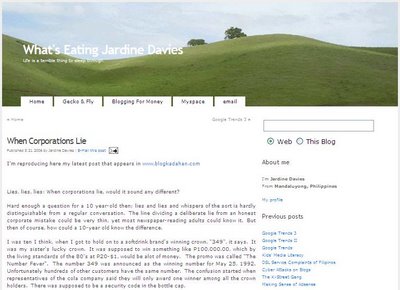 I was going through the list of previous entries at Blogkadahan when I came across Jardine Davies’ entry, When Corporations Lie? This is a highly recommended read.

Jardine is well-versed with our local culture as consumers, as well as with our rights as such. I posted a comment on his entry to make mention of the hidden defect issue with my HP laptop unit, as well as about SM’s unfair return/refund policy I had encountered. The following was his response:

There are laws that protect the Filipino consumers. It doesn't matter whether we have a similar government or independent agency tasked to pursue customer complaints... what we need is a complete change in attitude towards our rights as consumers.

We all need to be more assertive about what we paid for. It's not about laws, but culture. The law will adjust to men. We just need to start complaining to the authorities and not just to our peers.

And a good place to start to lodge a consumer complaint is by calling the Department of Trade & Industry (DTI) hotline at 751-3330. You may also send your complaint via email at btrcp@dti.gov.ph.

If you wish to file your complaint in person the address to go to is:

You may also file your complaints via hard copy as long as you send them three copies each of your cover letter and all supporting documents (copy of receipt, previous correspondence with merchant and/or manufacturer, and etc.) Address the envelope to the attention of Ms. Emma C. Asusano, Director. Better you send it through LBC Express in which you can even track its delivery online.

To increase awareness on consumer rights and responsibilities, DTI conducts a series of awareness seminars on consumer rights and responsibilities, as well as various laws affecting consumers such as the Consumer Act and the Price Act. It also produces and disseminates flyers, leaflets, posters and other information materials. You may also check out DTI's complete consumer protection services online.

We grew up in a non-litigious, docile culture and we, as a people, would rather walk away from a confrontation with a merchant or service provider or landlord, although sorely aggrieved. But Jardine is right — as consumers, we must now adopt a completely different attitude that is more in sync with the global community; that is, become more assertive when it comes to our rights as consumers, as well as become more demanding in getting what we paid for with our hard-earned money.

posted by Señor Enrique at 2:02 AM

Thanks for the info Senor...we all need to be familiar with our rights for our own protection.

My real intention here is to help prevent others from becoming victimized by unscrupulous merchants.

I agree! There are many products and services out there that are not only low quality but downright dangerous to life and limb. Take the flood of cheap electrical wiring, material, and parts flooding the Philippines from China. I bet you in a few years we will notice how there was around this period, a sudden spike in the average number of fires and electrical related accidents throughout the country. Last week I was so happy to buy for a measly P15 pesos, 10 pieces of 5 ampere 220 volt fuses at Robinson's Galeria (an expensive place). I nearly burned my P10,000 computer power supply when I used one. Inspecting it, I see solder splatter and other evidence of bad manufacturing, criminally bad manufacturing in the other nine pieces.

There are probably hundreds of other examples, not only in electrical but in cosmetics, household wares, and goods of all kinds.

We really need a proconsumer blog that exposes each case!

Muchas gracias, Rizalist, for reminding us about those cheap electrical items imported from China. Although seemingly innocuous, they do come with great risks to our lives and properties. Come to think of it, the thought alone of being engulfed in the raging flames of a fire is terrifying enough, let alone experience unaware.

In your case, if it was Robinson’s Handyman Store who sold you that fuse, then that particular store, its distributor or supplier and the importer of that fuse should all be made liable for any and all damages caused by that fuse.

In essence, if we as consumers demand more accountability from our merchants, surely we would at least curtail if not outright prevent altogether another flood of dangerous products from hitting our markets.

And you’re right, Rizalist, what we need is a Filipino proconsumer blog for everyone to read or write about consumer-related entries; sort of a homegrown consumer activism. And its primary purpose is to give the message out there that Filipinos in general are intelligent consumers.

I also believe that it’s about time we put a lid on this “but this is the Philippines” mindset, which in effect, only promulgates the idea that the practice of common decency amongst Filipinos is a mere option. It’s an attitude or reasoning encouraged only by men of unscrupulous nature mainly to serve their purpose and justify their wrongdoings. And that has got to stop.

In my opinion, it's actually the "palengke" attitude of us buyers here in the Philippines that's permeating here we buy our goods and sell them in a very personal way. It's kinda positive in a way that we can haggle as much as we like. But this sort of culture has that one disadvantageous trait; in general consumers here have so minimal awareness of consumer rights and laws. Maybe, some NGO or even the government, like DTI, should be having a very widespread consumer rights awareness program..

I’m intrigued, Major Tom, by your mention of the “palengke” attitude in your current comment; whereas, the other day, you depicted our palengke as a “microcosm of a flourishing society.”

I’m intrigued because I have been thinking ever since that maybe … just maybe … the best way to jumpstart an effective consumer rights awareness campaign -- helping change the attitude of Filipinos to that of assertive consumers, as Jardine suggested -- is at the palengke level. In other words, as you’ve defined it, in a “very personal way.” Grassroots level!

It's good you mentioned that Señor because I was also thinking hard of that aspect too, being afraid that I might have two minds on one issue or backtracking on my earlier opinions. But it's a little complicated; while I see the consumer specie here being in the so-called "noisy palengke" atmosphere, where everything seem to be happening, haggling here and haggling there, buying goods at arms-length mode, often without receipts or guarantees/warranties; there is this notion that this sort of situation---although something we are used to and sort of contented with---is so informal and lacks stability in form and substance. For example, awareness on consumer rights and consumer-proetection laws are so undefined. I bet more than half of buyers here in our country would go first to the police to complain rather than call the DTI hotline. That's how low it is.

This present "palengke" mentality is often good to us, as we flourish in it, lived with it and goes on with our lives with it, but just like the Philippine society, we need more refinement and progress on such.

Well said, Major Tom ... and you had given me much to ponder. As always, I appreciate your thoughts/comments, especially on issues that matter much to me.